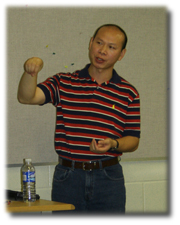 “Sometimes artists have weird ideas, but it is good to explore them.”

Ye Wang stated this shortly after displaying an exquisite PowerPoint slide showcasing an oil painting he created. Wang is a new art professor at Washburn. During his brown bag lecture in the Art Building discussing his life and work prior to Washburn, Wang displayed his past life and art.

Wang grew up in the Sichaun Province in China. At the age of 11 he discovered his high interest for English and decided to attend Anyue Middle School in Anyue City, China. He attended school there for two years earning his English degree. Soon after he graduated he started to teach at Anyue Middle School, even though most of his students were only a few years younger than him.

All through his life, Wang found himself drawn to his artistic side. He started keeping sketch books and soon decided to delve more into the art world by learning different aspects of drawing and painting. A friend explained to him that there was an art college in Chongqing, five hours away from his hometown.

To get accepted into the art institute, he had to complete courses in painting, drawing, creation and sketching as well as English, Chinese, geography, history and politics. At the time he applied, only 10 percent of all applicants were accepted into the school.

He was accepted in 1986 and took classes ranging from oil painting to art education, which he actually got his degree in. He spent the next couple of years drawing and creating many oil paintings along with teaching.

After time in China, Wang felt that he needed to explore different aspects of the world to further his artistic abilities. In 1991 he traveled to the University of Windsor in Canada to pursue teaching and to further his art career.

While in Windsor, Wang became infatuated with reflections. He soon began carrying a camera everywhere to capture images he wanted to paint. Now, Wang is rarely seen without a camera. After Windsor, Wang relocated to Dodge City, Kan. and eventually Topeka.

Wang has now been teaching at Washburn more than a month. He instructs several art classes including oil painting. Wang feels more than happy to be at Washburn.

“I think Washburn is great,” said Wang. “The people are friendly and I am really getting to enjoy the closeness of the staff.”