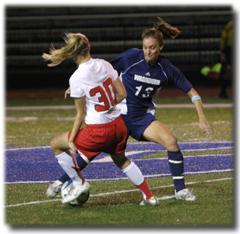 In 2004, coaches with The University of Kansas soccer program should have paid closer attention when Tim Collins spoke.

Collins, now in his fifth year as the Lady Blues soccer coach, contacted a coach within the KU soccer program, passing on information about a very talented player he had recently scouted. That player was Lady Blues junior forward, Jessica Mainz, a Shawnee Heights High School product. Three years later Collins is still puzzled as to why the Jayhawks didn’t pursue the Lady Blues’ 2006 second team All-American.

“Their loss is our gain,” said Collins. “Jessica is one of the best all-around athletes that I have ever had the pleasure to be around. She is looked up to by the other players on the team. Not only is she dominant in competition, but she is dominant in practice, and the other players want to rise to the challenge and stop her.”

Mainz is a two-sport star at Washburn, also playing a key role as the back-up point guard on the Lady Blues nationally-ranked basketball team. Mainz blew out her ACL during a club soccer game shortly before her senior year in high school. Prior to the injury she was being heavily recruited by Division I schools to play basketball. Even after the injury, she had offers from schools such as Nebraska and Colorado to play basketball. Luckily for Collins, those offers didn’t materialize until after Mainz had committed to Washburn.

Mainz said it took her four months to recover from the ACL injury.

“It was a tough road back,” said Mainz. “Mentally it was difficult for me to get back into playing soccer. It never crossed my mind to quit soccer. The injury made me realize how hard I had to work to get back to where I was before.”

Last year Mainz led the Lady Blues soccer team to an unprecedented 15-1-6 (10-1-3 in the MIAA) record and MIAA conference championship. Washburn was eliminated in the second round of the NCAA Tournament in heart-breaking fashion, losing 1-0 to the No. 1 team in the country, Nebraska-Omaha. Mainz has 95 career points (40 goals, 15 assists), shattering the school record of 60 points held by Jolene Silovsky, who played from 2004-06. Mainz, who holds school records in nine different offensive categories, is optimistic about the Lady Blues’ postseason chances as the MIAA tournament approaches.

“I think we can advance farther than we did last year,” said Mainz. “We control our own destiny, and right now it’s up to us to win.”

Lady Blues basketball coach Ron McHenry said that Mainz has a chance to be the starting point guard, but that depends on when the soccer season ends. Last season for the Lady Blues Mainz averaged 4.2 points per game, while appearing in all 33 games.

“Because of her toughness and what she has done for us over the last two years, she deserves a shot to start,” said McHenry. “If you critiqued her basketball ability you would think she is a good player.

“Once you put her on the floor and let her compete, you see a much different ability. When the game is on the line she kicks it into another gear.”