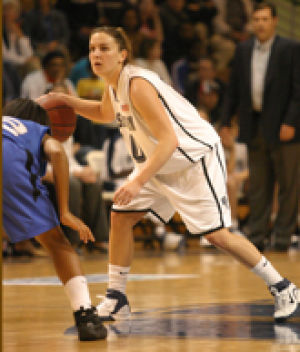 Lady Blues basketball head coach Ron McHenry doesn’t expect to be the next Bob Stoops anytime soon, facing former assistants week to week on game day. But he sure is glad when the opportunity presents itself.

“I hope that it happens a lot because that means what you’re doing is working,” said McHenry. “It hasn’t happened as much as I’d like it to. This isn’t a coaching factory by any means. But as the game progresses you should have more ex-players involved in the game.”

“We do play St. Louis, but that was all done well before she got a job there,” said McHenry. “I think Lisa has her own philosophy now. She has her own ways of doing things. Lora will probably think more like I do because that’s all she has done was play and coach for me, but she is not calling the shots. I don’t think they will be very predictable at all.”

What is predictable is the student coaches McHenry picks from year to year to help the program. McHenry integrates former players who have some schooling left, yet, may want to pursue coaching at a future time.

“We try to use kids that have played in our program that still have hours,” said McHenry. “Very seldom does an athlete finish school in four years. We try also to pick kids who may want to get in the coaching field, whether it’s in high school or college at some point.”

Former All-American forward Carla Sintra returns for her fourth year as a student coach along with newcomers Jessica Aebi and Brooke Ubelaker.

Sintra said she enjoys the benefits of coaching while still in school.

“I like coaching and I like to be around [McHenry],” said Sintra. “If I ever go on to coach I want to adopt some of the same philosophies he has. It is a great opportunity for me as I go to school.”

Sintra just started the Washburn Nursing program this fall and Ubelaker is finishing her elementary education degree. Although the experience of coaching may have it perks, Sintra explains it does take a lot of time.

“You have to have your priorities set straight,” said Sintra. “You have to be organized because coaching can take a lot of your time going to practices, etc. You just have to be responsible.”

Aebi also is finishing her degree in nursing. She, as last year’s starting point guard, averaged eight points per game and was named to the MIAA Commissioner’s Academic Honor Roll.

“Jess and Brooke bring a lot of winning and understand what it takes to win, and that’s the biggest thing to teach to our kids in our program,” said McHenry. “We have a ton of talent but we have to teach them the responsibility of day-to-day work.

“They see things through our eyes and the players’, as only being one year removed.”