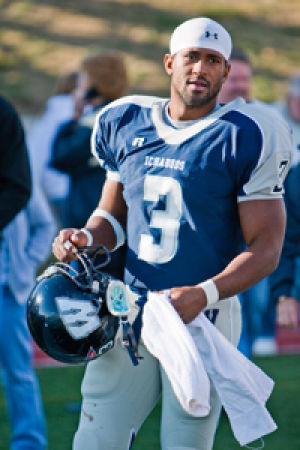 “It’s a great accomplishment to break any record,” said Mosley. “Breaking the record shows that you have put in hard work. I have had a lot of help from the offensive linemen and have to share this record with the O-linemen.”

Texas Tech, Kansas State, Purdue and Tulsa recruited Mosley, who originally signed a letter of intent to play for the Arizona Wildcats. He was ranked as a 3-star recruit by rivals.com, rushing for 2,330 yards and 27 touchdowns his junior year at Southwest High School in San Antonio, Texas, and was selected to play in the U.S. Army All-American game. Mosley never played for Arizona, however, electing to attend Washburn for personal reasons.

“I had high expectations for myself,” said Mosley. “But playing for a Division II football team, I understand how much respect they get. It’s not easy playing in the MIAA. It’s the toughest conference in America.”

In 2004 Mosley filled in for the injured Hearn, rushing for 1,084 yards and 11 touchdowns. Washburn football coach Craig Schurig said that one of his goals coming into this year was for Mosley to exceed the 1,000 yard rushing mark, extending a streak of four consecutive seasons that Washburn has had a 1,000 yard rusher.

“Right now he is running as well as anybody in the country at our level,” said Schurig. “He’s really elusive. The key for him is his real quick stutter moves. When he gets vertical after that he’s really tough. Ra’Shawn’s talent is such that you could see him breaking any record that was out there.”

“The last four games Brandon has really come around as a running back,” said Schurig. “Now he’s running the ball like a tailback and not just running the play. He’s really seeing the holes now and is utilizing his great speed and strength.”

Walker was dynamite at wide receiver against the Bearcats, hauling in seven catches for 115 yards and two touchdowns. Against Truman State a week earlier, Walker made the Bulldogs’ defensive players look like they were on roller skates, rushing for 143 yards and four touchdowns.

Despite his excellent play at wide receiver, as well as displaying a strong arm at the quarterback position, Walker will enter the 2008 season as the No. 1 running back on Washburn’s depth chart according to Schurig. The Ichabods will continue to boast excellent depth at running back next year as speedy freshman Terrence Lowe will ascend to No. 2 on the depth chart.