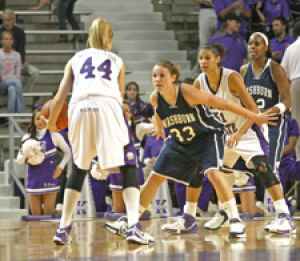 It’s hard to imagine a world where an injury would help a team. But with the return of junior guard Karla Tailele and redshirt freshman guard Hope Gregory from injury last year, the Lady Blues have experience they can count on while the eight new players adjust to the program.

“Organization is a big part of a good basketball team,” said Ron McHenry, head coach. “To be good early, especially this early, you’re going to have to have players that know what is going on. All the kids coming back have a leg up on the new ones coming in. With Jessica Mainz still out, we are still looking for people to fit in. Karla and Hope fill that well.”

Both Tailele and Gregory received a medical redshirt after aggravating an injury early, leaving both an opportunity to do the only thing they could do – learn the system.

“The experience is unbelievable, said Gregory. “I didn’t even get to play and I feel like I did. because you understand the offense a lot better and you know the style of college play compared to high school and it’s completely different.”

Gregory only got to play in five games last year before suffering a stress fracture in her foot. But this year she’s back on track physically and with a year under her belt.

“I feel better,” said Gregory. “I spent all last year learning the offense and what coach Mac wants and his ways. That helped me out a bunch. I’m still behind a little bit, but not physically, because my foot doesn’t feel as bad.”

“Physically I feel a lot better,” said Tailele. “I just have to get in better shape. But mentally I need to get into the plays and learn them.”

With last year’s starting point guard Jessica Aebi lost to graduation, Tailele will have her number called on early as junior point guard Jessica Mainz makes the transition from the soccer field to the hard court. Division I Utah transfer sophomore guard Brette Ulsaker is slotted to start at the point, but Tailele and freshman Hadleigh Meek will share the load.

“I see a lot in Karla as I did in Aebi,” said Corkey Stiger, senior guard. “They have that same drive and her being at the one will really help. I’m glad her knee is well and she has been playing really great. She just has a lot of adrenaline and I love that about her. She plays hard every day and she comes to practice ready.”

Perhaps the biggest contribution to the program Tailele and Gregory bring is understanding. Both understand what the process of learning takes and are willing to help the incoming new eight players learn as much as they can.

“I feel for them because I was in that position,” said Tailele. “So I try not to be hard on them because I went through the same thing. I know how difficult learning the plays is.”

So far the learning process has been successful, says McHenry.

“It’s been up and down,” said McHenry. “Every practice has been a plus. They’ve come to work and tried to learn. I don’t think they’ve learned it all by any means, but they’ve tried. So no negative practices are a plus.”