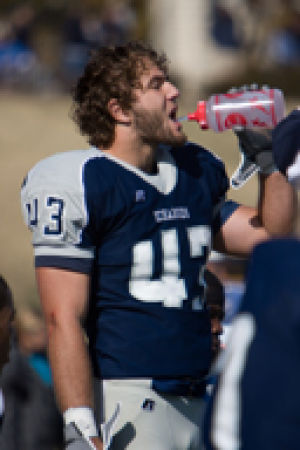 Zach Watkins’ job requires him to roam the middle of the field and level crushing blows on the opposition.

Watkins, a 6-foot, 230-pound sophomore middle linebacker, has done just that during his first two years at Washburn University. He recorded 100 total tackles, two sacks and one interception on his way to winning 2006 MIAA Freshman of the Year honors and being named to the MIAA’s All-Academic team. Watkins returned a fumble 72 yards for a touchdown against Northwest Missouri State and a 19-yard interception return for a score against Emporia State.

Through hard work and determination, Watkins has earned the respect of the entire team and coaching staff. Prior to this season Watkins was voted by the players as one of the team captains. Washburn football coach Craig Schurig said that it’s the first time he recalls such an honor being bestowed on a sophomore.

“One of my goals coming into the year was to become a team leader,” said Watkins. “After losing some important players from last year’s team, I thought I could be one of those guys who could step in and take a leadership role.”

Watkins is on a torrid pace this season, recording 122 tackles, a sack and two interceptions through 10 games. He has hit double-digits in tackles six times this year, including a monster performance against Central Missouri when he corralled 20 Mules. Watkins also came up golden in Golden, Colo., Sept. 1, recording 19 tackles against the Colorado School of Mines.

“He is a talented player who is very consistent,” said Schurig. “He plays the linebacker positions exactly how you want him to. He’s tough, physical, and you can count on him week in and week out.”

“Zach leads by example on practice and game day,” said Schurig. “He is always around the football and making plays. At linebacker, you need guys who can tackle and make things happen, and that really describes him.”

Watkins has been a linebacker since his Pop Warner football days. He attended Truman High School in Independence, Mo., where he was the football and basketball team captain during two of his seasons.

He was named first-team All-State in football after his senior campaign, posting video game-like numbers with 151 total tackles, including a staggering 120 solo tackles.

Watkins also excelled in the classroom, graduating with a 4.35 GPA.

Watkins said he selected Washburn instead of other MIAA schools because he believed Schurig was well on his way to building a winning program.

“What he has accomplished here in six years is amazing,” said Watkins. “A key factor was his ability to keep the staff together. He’s gone from losing seasons his first couple of years to a conference title and always being in the running for a conference title. Washburn was the best fit for me. It’s worked out great and I have loved every minute of it.”