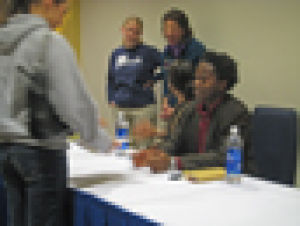 While most American children have a childhood involving sidewalk chalk and training wheels, for Ishmael Beah, childhood past the age of 11 involved a steady cycle of violence, some of which he was coerced into perpetuating.

Beah is the author of “A Long Way Gone: Memoirs of a Boy Soldier.” When Beah was 11, civil war broke out in Sierra Leone. By the age of 13, Beah was a child soldier. After three years of fighting, he was removed by UNICEF and placed in a rehabilitation center. In 1998, he moved to New York City and attended high school, then studied at Oberlin College.

Beah opened his presentation with a discussion of why he wrote a book about his experiences. Beah said he wanted his work to start discussion of the child soldiers who are used all across the world. When Beah arrived in the United States, he realized he had to do something to educate people about his homeland. He said media channels often sensationalized the violence in the conflict. They portrayed the conflict as if it had always been occurring. Beah claimed that without any sort of context, people couldn’t see the humanity. He wanted to put a face on the conflict.

“People believe that children who are dragged into this war can never recover,” said Beah. “With support, they can recover.”

Beah began writing the book in college. He spoke on panels for the United Nations and UNICEF, but he found that 15-20 minutes was not enough time to fully develop his point. In college, his composition teacher asked him to write a paper about how he played as a child. He thought the full story might be too much for his classmates. He did not tell much of his story because he wanted people to see him as he stood, rather than how he was. The book began to form his junior year in college. He said it was difficult, often painful, to write about his memories.

“Many, many times I wanted to walk away from it,” said Beah.

Despite this, he wanted to express how he felt, like when he became numb to the violence that was part of his everyday life. The military became his family and community because he had lost both in the course of the war. Beah said he wrote the book to help other child soldiers.

“The difficulties that came with remembering the war was a small price to pay,” said Beah.

The author then read an excerpt from his book in which he described one of the first times he encountered a skirmish. He said he and the other children ran from the war, but they eventually became an active part of the war. The child soldiers lived in fear of being killed for disobeying or not joining the effort.

“The purpose of war is to kill people,” said Beah. “People find interesting ways of justifying that, but when you are on a battlefield it is your life or the other person’s.”

Beah said violence was a currency. Through it, one received food and shelter. After rehabilitation, Beah was able to undo much of the conditioning coerced into him. He said he continues to have insomnia problems because of his experiences.

Beah described a peaceful Sierra Leone prior to the war, including a man who said, “We must strive to live like the moon.” His grandmother explained that meant people should always strive to be on their best behavior and that no one grumbled when the moon shone.

The young veteran emphasized the importance of education in the end of his formal presentation.

“[Education is] a journey of self-discovery,” said Beah. “How you can use this education to benefit others who are not as fortunate.”