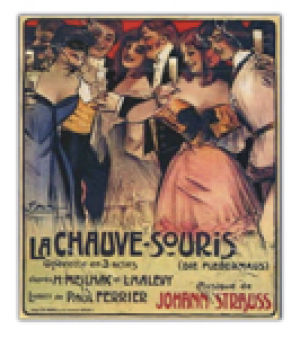 Alcoholism, infidelity and fraud are all themes of “Die Fledermaus” (The Bat), an operetta that debuted Friday, Nov. 16, at White Concert Hall. Incorporating the musical and theatrical works of Johann Strauss Jr. with bits and pieces of modern day comedy, the operetta took on a life of it’s own.

The play began humorously, as singing teacher Alfred, played by Rick Huffman, stands outside the window of his former pupil/possible lover Rosalinda, played by Rita Hrenchir. As he tries, and fails, to hook up with the married woman, she fears being compromised and cannot help but fret over the fate of her husband Gabriel von Eisenstein, played by Nate Goering, who is sentenced to spend eight days in jail for disorderly conduct.

Eisenstein’s old friend, Dr. Falke (Elliot Lauxman), stops by the house to see his companion before he goes in for his sentence. Still holding a grudge from a previous prank that Eisenstein had played on him, the doctor invites the potential jailbird to go to a ball to drink and meet “dancing girls.” Fearing more trouble from the law, Eisenstein initially declines the offer. However, after much prodding, Eisenstein agrees to go to the ball as he expects to get away with it.

The doctor casually forgets to tell him that he invited other guests who could incriminate him, including his wife, chambermaid (Amy Imparato) and the warden of the prison (Adam Aadalen). What ensues is an onslaught of false identities, marital suspicions and the bland excuse of having too much of the bubbly.

As the night drew on and on, the musical sections became less and less exciting. The second act seemed to draw on for ages because of the cluster of songs during the party. The third act seemed to awaken the crowd with the introduction of Frosch the jailer, played by David Hess. Hess did a great job in portraying the drunken jailer, giving a hilarious performance as he stumbled around the stage and delivered laugh after laugh.

However, the funniest moment of the night was when the wrongly imprisoned singing instructor Alfred begins to sing, “Why can’t we be friends?” to the jailer. The operetta seemed to be filled with such script changes, perhaps in an attempt to lighten up the old-school comedy of the original of 1874. Such examples of going against the milieu included references to Topeka, partying in Lawrence and O.J. Simpson.

I thought overall that the operetta was lengthy and drawn out in certain spots. However, the cast did a great job in delivering the comical aspects that made the show what it was. If you had the three hours to spare, it was worth watching.