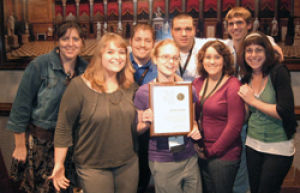 Washburn University is home to a nationally-recognized student newspaper for the second time in 40 years.

At the end of October nine members of student publications, which includes The Washburn Review and Kaw Yearbook, traveled to the National Associated Collegiate Press Conference held in Washington, D.C. Besides wading through consistent humidity and multiple seminar sessions, up for grabs were the 2006-07 Pacemaker awards.

The Pacemaker, a prestigious national award, has been awarded since 1927 and is annually given to a small percentage of the top college newspapers in the country. This year, the Review stood alongside collegiate publications from Harvard University and the University of California at Los Angeles.

“I think this is an illustration of the talent that was and is on the staff,” said ReAnne Utemark, editor-in-chief of the Washburn Review. “I think it shows how far we’ve come, and it’s also a motivating tool.”

Bringing it home after nearly 40 years, the previous and first Pacemaker awarded to the Review was in 1969. To put things into perspective, the hot topics at the time were the legitimacy of the Vietnam War, a request for student input on the construction of the soon-to-be-christened Mabee Library, and students enrolling electronically using card-reading machines from IBM.

Former editor-in-chief Sarah Van Dalsem said the award represents several years of reshaping and reworking the face and content of the Review.

“It didn’t start with just last year,” said Van Dalsem, adding that it added a sense of legitimacy to the Review. “Our first mission is always to Washburn, but it’s nice to have the approval of professional journalists.”

Utemark said that she hoped the staff would continue to maintain the quality of the newspaper, and that it will encourage students to read and respond to issues brought up in the publication.

“While it’s fantastic to be recognized nationally, we’re still trying to establish respect with students here,” said Utemark, who hoped the award would legitimize the Review to students and would serve as a source of motivation for the staff.

While the tastes and preferences of the judging committee change every year, among the criteria used to determine the recipients of the Pacemakers are design, photography and evidence of in-depth reporting.