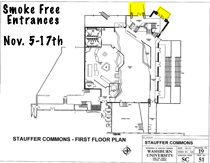 The Smoking Decision Committee was formed in response to the majority of voters in the spring WSGA election who said they did not want smoking on campus. The committee consists of both WSGA senators and students outside of the WSGA organization.Whitney Philippi, chairwoman of the committee, said that was not the first referendum.

“It was on the ballot a few years ago,” said Philippi. “But no one did anything about it last time.”

Philippi said this project is the biggest undertaking of the committee so far. Since the formation of the group, its members have spent time researching what other schools have done with smoking policies. One example is the University of Kansas in Lawrence, which has a city ordinance against smoking.

The committee has been working with Kathy Reser, director of the Memorial Union, to implement the trial. Smoking will be banned up to 30 feet away from certain entrances into the Union.

Philippi said enforcement was still being discussed. The trial will indicate whether or not people will respect the ban. Philippi said in order for campus police to get involved, a city ordinance must be passed.

Stephen Mitchell, a senior French major and a smoker, is against the ban.

“I think it’s silly,” said Mitchell. “I don’t understand how it is testing anything. It’s one thing to walk 30 feet from a door to smoke, it’s a different thing entirely to leave campus for a cigarette.”

Mitchell said he didn’t understand how non-smoking students were having problems with clouds of smoke, as the smokers were outside and the smoke would dissipate.

“I would be very upset with an overall ban,” said Mitchell, “as a smoker and a defender of civil rights.”

There will be a townhall meeting 8 p.m. Nov. 14 in the Union Market. Both smoking and non-smoking students will have the opportunity to voice their opinions about the ban.