No. 6 Lady Blues roll over No. 13 Moundbuilders 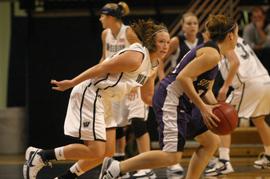 I am your shadow Lady Blue Hadleigh Meek follows Southwestern's Kinsey Colclasure, keeping a tight net of defence around her.

People have come to expect it out of the No. 6 Lady Blues. When they score they score fast, and Saturday was no different as the Lady Blues cruised to a 75-44 win against NAIA No. 13 Southwestern Moundbuilders.

“With this team we have a lot of people that can score a lot of points,” said Amanda Holmes, senior forward. “It’s pretty equal across the board. The first half we didn’t hit shots, and they did and made it really close. But second half we had more stops and knocked down our shots and pulled ahead.”

Holmes earned a double-double Saturday with 11 points and 14 rebounds.

For the Lady Blues, leading only by seven over the Moundbuilders early in the second half was not a concern, because the run was coming. Lady Blues junior guard Janice Bright completed a three-point play with a jumper and a following free throw at the 16:49 mark of the second half that sparked a 17-4 run.

“We have some players, and they made plays,” said Lady Blues coach Ron McHenry. “We made some threes and Janice made a nice play there. We got a team that can explode offensively if they want to.”

The run broke the back-and-forth pace in the first half as the Lady Blues were struggling to adjust to the Moundbuilders 2-3 zone.

“It was more just trying to get into a rhythm and finding the open man,” said Karla Tailele, junior point guard. “The zone kind of caught us off-guard tonight. We weren’t ready for it, so we just had to adjust.”

Tailele, with 10 points, was one of four players in double digits for the Lady Blues. Every player but two put up points Saturday.

The Lady Blues will host another NAIA opponent Tuesday, the Baker Wildcats. The Wildcats are 3-4 so far this season.

“There will be some things we’ll need to do a lot better this next time out,” said McHenry. “We didn’t play perfect by any means. We will get in the film room and check it out and try to improve.”

But perfection will have to come quickly as the Lady Blues host the No. 12 Texas A&M Commerce Lions Friday in the AM580 WIBW Holiday Classic. The Lions ended the Lady Blues’ season in the South Central Regional championship game 71-70 last year.

“Personally I would love to beat them,” said Holmes. “It was a good game last year and hard fought by both teams. Losing in the regional finals is a stinger especially me being in the pressure position I was.”

Holmes missed a free throw as time expired that would have sent the game into overtime. The Lions return three starters from that game, including standout junior guard Britney Jordan, who scored 13 points in the championship game.

“Commerce is a really athletic group that we’ll have a hard time guarding,” said McHenry. “Obviously [Jordan] was one of those we had a hard time with last year. Hopefully will take care of business getting to that game, but it should be a good contest. It’s in the back of their minds, no doubt.”

The Lions won their only game of the regular season against Southern Arkansas 54-50.

“We will have to work a lot harder during the week,” said Tailele. “We have to be aggressive with them because they’re a really good team.”

The Lady Blues will play host to the Long Island C.W. Post Pioneers in the first game of the classic Thursday. This will be the first match up with the Pioneers in Lady Blues history. The Pioneers were picked to finish second in the East Coast Conference.