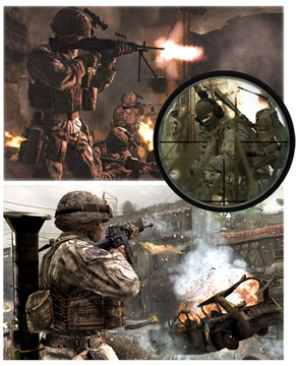 From the beaches of Normandy to the sands of North Africa, Activision, partnered with Infinity Ward, has taken gamers on a long path through the storied past of World War II. Now, after creating what many believe to have been the shining stars among WWII shooters, they transport players to the technological battlefield in “Call of Duty 4: Modern Warfare.”

Released today on Xbox 360, Playstation 3 and PC, the much-anticipated game is set to bring more than just a new environment to eager trigger fingers across the nation. With eye-popping graphics and a combative system that would make any “COD” veteran salivate, Activision has done more than its fair share of innovation. Following suit to other smash hits like “Halo 3,” “COD 4” released a beta to a limited number of gamers Aug. 27 of this year, utilizing the best resource available to quickly seek out and destroy bugs and glitches, many of which can make or break a game on opening day.

Sporting more than your average shoot-’em-up FPS, “COD 4” follows other special ops-centered titles like “Rainbow Six: Las Vegas” by allowing the player to custom-equip their avatar before each mission, campaign or multiplayer game. Players can also call in an air strike to a specific location to help obliterate their opposition or simply to confirm a kill. The melee system has also been reworked, giving a satisfying instant death from a single strike.

Finally, as an ending homage to a downed player, is an innovative new feature of “COD 4” known as Last Stand. This feature allows a player on the verge of death to pop off a final shot at passing enemies. While it’s not as good as body armor, the Last Stand feature allows the gamer’s revenge, a dying pot-shot before re-spawning.

As eager players line up for their chance to sample Activision’s latest fare, frags will be thrown and bullets shot, and with a little luck, “COD 4” will come through in a barrage of glory.