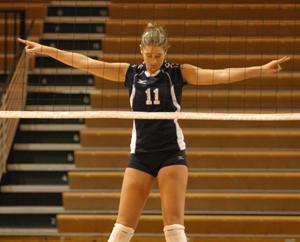 Focus Senior Tessa Jones prepares mentally prior to the first serve of the game against Southwest Baptist Friday. The Lady Blues hope to have similar focus in the MIAA conference tournament this week.

The Lady Blues volleyball team has had a record season dominating the MIAA conference. They will try to defend their regular season title in the first round of the postseason conference tournament 7 p.m. tomorrow in Lee Arena, where the women are undefeated.

“We’re pretty excited about it having our first game at home,” said freshman Anna Simpson-Mills.

“The first place seed gives you the home court advantage with the benefit of having your fans to cheer you on,” said Miesner.

“The conference tournament is basically just for rankings,” said senior Tessa Jones. “If we were to win the tournament, then we would definitely host regionals, which would be great. If we lose in the tournament, we’re not done with the season. So there’s not as much pressure for this tournament because it’s not single elimination.”

The team is very passionate about never overlooking an opponent and being prepared for every game.

“We always take it one game at a time,” said Miesner.

Miesner mentioned the team would sit down and watch film today, something the coach takes very seriously.

“It’s the coach’s job to make sure the team is ready to play every game,” said coach Chris Herron. “I’ll be my usual intense self and do my best to get them ready.”

Herron has had a record season as Washburn makes its way into the postseason for another year.

“We just got to make sure we play with a lot of confidence. I think that’s the biggest thing,” said Herron. “We can’t play with any fear, and we got to play to win. We can’t worry about waiting for the other to team to make mistakes. We have to create our own success.”