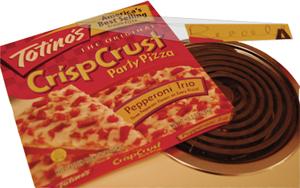 Freezer foe Nov. 1, nearly 5 million Totino's and Jeno's brand frozen pizzas were recalled by parent company General Mills because of possible E. coli contaminations. However, the above pizza was purchased last week by Review photographer Kathryn Ellis at the Price Chopper, 4015 SW 10th Ave., with the word "recall" written on the box.

Could be E. coli.

While General Mills says the pepperoni itself came from a separate supplier whose name has not been released to the public, the massive numbers of contaminated frozen pizzas were all produced at a General Mills plant in Wellston, Ohio, then distributed across the United States.

There are 21 reports of E. coli illness under investigation by state and federal authorities. Nine of the 21 people reported eating Jeno’s or Totino’s pizza with pepperoni topping prior to becoming ill. According to the Centers for Disease Control and Prevention, eight of the 21 victims have been hospitalized and four have developed a type of kidney failure.

Eight of the cases were reported in Tennessee and a number of small reports were discovered in Kentucky, Missouri, New York, Virginia, Ohio, Pennsylvania, Illinois, Wisconsin and South Dakota. Young children, the elderly and people with weak immune systems are most vulnerable to the potentially deadly bacteria.

While Kansas hasn’t had any documented E. coli cases in relation to the General Mills recall, the Topeka community is still taking precautions.

Washburn student Traci Kitrell has been buying Totino’s pizza products for more than 10 years. While she and her family enjoy the pizzas because they are easy to make as well as economical, she is still frustrated with the recall.

“I think we take our safety for granted when it comes to foods being contaminated,” said Kitrell. “It worries me. I find myself wondering, ‘Now what?'”

Kitrell says she feels left in the dark when it comes to food recalls, as she is just now starting to see recall signs posted in the Holton grocery store where she usually shops.

“I just wish they could have given us a more adequate warning,” said Kitrell.

With the earliest case of E. coli reported July 20 and the most recent case occurring Oct. 10, there is a chance that the majority of pizzas affected by the recall are already in consumers’ freezers. The recall involves eight types of Totino’s brand frozen pizza and three types of Jeno’s brand frozen pizza. Together they share the commonality of a pepperoni topping or pepperoni in combination with other toppings.

Grocery stores across the nation have been hastily pulling the products since receiving news of the recall. The Wal-Mart at 1501 S.W. Wanamaker has removed all of the Totino’s and Jeno’s brands containing pepperoni. A Wal-Mart customer service representative who declined to have her name released said that they are currently refunding customers who return the unopened pizzas. The returns are then sent to the claims department.

While Dillon’s grocery stores in Topeka are following similar procedures, official spokesperson Sheila Lowry was not available for further comment by press time.

Lisa Taylor, a public information officer who works at the U.S. Department of Agriculture, explained that the majority of recalls is first promoted by the Food and Drug Administration. Usually the USDA does not get involved in large recalls unless its assistance is requested.

“While our main job involves food safety inspections and so forth, we are also qualified to verify the effectiveness of recalls that are distributed by specific retail outlets with contaminated products,” said Taylor.

Statewide reports of E. coli illness are handled by the Kansas Department of Health and Environment. Communications specialist Mike Heideman explained that the KDHE assists local health departments with investigations of cases as well as sometimes dealing directly with reports.

“E. coli is one of a number of diseases that are reportable by state law,” said Heideman. “When a doctor detects a case, they report it to the local health department who then passes that report on to us.”

Although the General Mills E. coli recall is still under investigation, consumers like junior Lindsey Spencer are now questioning whether they will resume purchasing Totino’s and Jeno’s products after this incident has passed.

“Even though I’ve been buying their pizza for about four or five years, hearing about this possible E. coli outbreak changes my overall image of them,” said Spencer. “It’s easier to switch to another pizza product because there are so many to choose from. It’s like when they recalled the Peter Pan peanut butter, I just switched to JIF.”

Kitrell, however, is still weighing her options.

“If they got the problem fixed, I would continue to buy from them,” said Kitrell. “You never know what food is going to be contaminated, so really you’re taking a risk with anything that you purchase today.”

Consumers who are interested in getting replacements for their recalled pizzas are being instructed to clip the barcode from the recalled box and mail it along with their name and address to Totino’s/Jeno’s, P.O. Box 200 – Pizza, Minneapolis, MN 55440-0200.