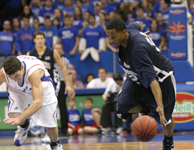 The Bods can now exhale: The toughest part of the season is done, with only 33 more games to go. The Bods finished a run of facing four Division I opponents Thursday night, falling to No. 4 Kansas in the season opener 60-92.

“We kept playing even though they got away from us,” said Bob Chipman, head coach. “I was pleased that we kept playing and kept trying. It was a good outing for us.”

The Bods scrimmaged Creighton earlier this season and fell to UNLV 47-77 and UMKC 75-79 in exhibition play. Thursday, the consistency of Division I opponents showed early as the Bods looked to compete.

“The first 12 minutes of the game we were right in it,” said Kyle Snyder, senior forward. “We held them to 20 points and that’s big for this Jayhawk team because they run the floor and usually get easy lay-ups.”

Snyder also played against then-No. 1 KU in a 2004 exhibition match where the Bods were at the fingertips of upset the whole night before finally falling. The Bods were just trailing by six, 22-16 with 6:11 left in the first half.

“It reminded me of the other game a little bit,” said Snyder. “We had them shut down and we ran our stuff in the way we wanted to. It was good for us.”

But then the game pace and size of Division I basketball caught up with the Bods. Kansas’ defense shut down the Bods’ offense the rest of the half, giving up a bucket at the 2:37 mark and going on a 12-2 run. In just six minutes the Bods found themselves down by 16, 34-18 at halftime.

“They wore us down,” said James Williams, junior guard. “There was points and times that I would look around at the other guys and we were just tired from banging around with them physically.”

Williams, along with junior guard Angel Santiago, led the Bods in scoring with 11. Santiago drove the Bods’ offense in the second half with three buckets from beyond the arc. But it wasn’t enough to hold back a KU offense that finally found the mismatch at the post in the second half.

“In the second half their big guys said, ‘Hey, look were going to catch it under the rim and I’m going to score,'” said Chipman. “They were so good offensively in the second half catching the ball deep and finishing.”

But not all was lost Thursday night. The Bods won the battle of the boards in the first half, out rebounding KU 23-22.

“From the Creighton game till now, we have made a dramatic turnaround in rebounding,” said Williams. “Everybody worked hard and crashed the boards. That’s a big thing Chipman has had us working on.”

The Bods hit the boards hard the next two nights as they cruised past Lincoln University 102-70 and Upper Iowa 76-44 in the Missouri Western Hillyard Classic.

The Bods hope to continue with success this Friday and Saturday against Missouri Baptist and Kansas Wesleyan in the WIBW Radio Holiday Classic.