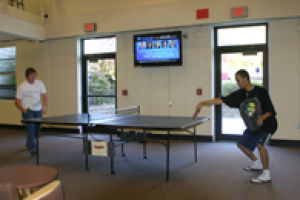 “Balls of Fury” bounced out of theaters as soon as it was volleyed in. But pingpong has become a mainstay in the Washburn Memorial Union.

“‘Balls of Fury’ did nothing for pingpong,” said Tyler Powell, junior sociology major. “It was absolutely a horrible movie.”

Powell, however, has done a lot for pingpong. Specifically, Washburn pingpong. Powell and a group of friends started playing on a regular basis last semester, when the Union purchased the table. The group attracted a following and now a group of 10-15 students play pingpong every Monday, Wednesday and Friday from 11 a.m. to 2:30 p.m.

“I’m not too sure how it all came about but I think people saw that pingpong could be fun,” said Powell. “A lot of people kind of just stand around and that’s boring. They finally saw that pong could be competitive.”

In response to its popularity, Powell and company created the Washburn Table Tennis Club. The club members meet every Sunday at First Church of Nazarene to work on their skills. The church has seven tables in a gymnasium, which gives more players an opportunity to play.

The game play has become so intense that the club is looking to compete against competition other than Washburn students. The club just finished match play with schools like K-State and Wichita State this past weekend.

“A few of us play for the Topeka Tennis Table Club,” said Powell. “We just play for fun, but we’re trying to start a division with K-State and Kansas. … We need more participation from those schools to get it really going.”

In the meantime the club will continue to play other Washburn competitors. The Union attracts people with little to no experience to veterans of the table court. The influx of interest has spurred some misunderstandings of the rules, however.

“Since a lot of people don’t play it competitively there are a lot of misconceptions about the rules,” said Powell. “Whether it’s how I serve, the net height or the bounce rule. Most people play ’til 21 but the real rules is to play ’til 11 and switch sides ’til someone reaches the best of five.”

But the club is more than willing to teach the rules and other aspects of the game for newcomers.

“Teaching the rules or how to play is something we’ve never talked about,” said Ditch. “But I suppose if somebody wanted to learn we’d be more than happy to teach them.”