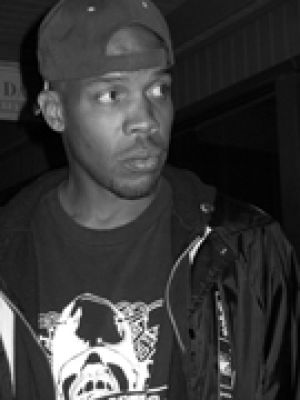 Born in Wichita, raised in Topeka, as directly stated in one of his tracks, Str8jakkett is releasing an album this month that truly showcases his life and mad rap skills.

Stu Tidwell, also known as Str8jakkett, is the founder of Dope Versatile Styles Manifested in a Direction to Succeed from A-Z (DVS Mindz), and has literally been interested in rap since childhood.

“Stu’s been doing this for like 80 percent of his life,” said Zach Trimble, Str8jakkett’s friend and album publicist.

“Ever since he was a kid, he approached it as an art.”

Trimble only lived three blocks from Str8jakkett and the other members of DVS Mindz but didn’t know Str8jakkett personally until later.

Str8jakkett has been involved in three albums prior to this one, but his newest and only solo album, “Mood Swings,” is coming out this month. He’s anxious to get the word out.

Str8jakkett attended Topeka High School and first started to disc jockey high school and local parties. In 1989 he started writing his own rhymes and eventually joined DVS Mindz in 1991. It was just Str8jakkett and one other guy at that point, and his cousins rapped with them for a while. It wasn’t until 1993 that DVS Mindz really progressed.

Carla Daniels, a former intern at Washburn, actually helped Str8jakkett get started and got him gigs around the country when he was just beginning as an emcee.

“They used to blow my mind when I’d hear them rap,” said Str8jakkett.

Str8jakkett uses freestyle whenever he can. He said that sometimes it becomes “sickening” because he’ll catch himself unconsciously rhyming in a normal conversation.

The terms “hip-hop” and “rap” are almost always used together, but Str8jakkett says there is a difference between the two.

“Rap is a term that’s been used by the media,” said Str8jakkett.

“This has always been hip-hop. Music is music. Hip-hop is hip-hop. It is what it is.”

Trimble said that with hip-hop, “you try to consciously live a certain type of culture. It’s like a conscious lifestyle.”

Rap is the same as hip-hop, but “it’s the rawness of the street,” said Trimble. “It glorifies, for better or for worse, the negative aspects of urban life.”

Before Str8jakkett was really into creating his own hip-hop scene, he said that a certain song on the radio really struck a chord with him. “Planet Rock Drop” helped open the doorway for Str8jakkett to enter the rap industry.

He used to beat box and compete in several “battles.” These started on the street with his peers as judges.

“You could be out there for an hour with the same guy going back and forth,” said Str8jakkett.

Battling today, however, can have several judges and usually limits a single rapper to 30 seconds at a time.

Though battling is a great way to sharpen rapping skills, he said that he hasn’t done it for six or seven years. He has three kids now and more important things to focus on.

“I’m not beyond battling, but I’m on a different plane,” said Str8jakkett. “I’m trying to make great music, feed my kids, speak to the youth and just move it further.”

One of the attractive aspects about Str8jakkett is that he writes all of his own lyrics. He said that it’s amazing how many top-notch artists aren’t writing their own stuff.

“It’s important as an emcee that you do that,” said Str8jakkett.

He emphasized that artists who don’t write their own lyrics don’t deserve half the respect that true lyricists do.

When creating “Mood Swings” Str8jakkett started, stopped, stepped back and decided what he wanted to portray through the album. He wanted to show himself completely, and that’s exactly what the album does. It’s honest, not censored and displays the true spirit and background of Str8jakkett.

“Everyone in DVS Mindz is featured in this album, but “[it’s] about me,” said Str8jakkett. “I wanted people to know where this came from, where it’s been, and where I’m at now. … I’m introducing myself to the world.”

“Mood Swings” doesn’t have an official selling home yet, but DVS Mindz is planning to release the album at CD Tradepost, Hastings, Olliewood Skateshop and www.11third.com after the site has been launched.

A few songs on the album are on Str8jakkettt’s myspace page and can be accessed at www.myspace.com/ Str8jakkettdvsmindz.

Str8jakkett is an amazing emcee, lyricist and full time father. After listening to “Mood Swings,” he’s sure you’ll want to hear his next album. It doesn’t yet have a name, but he’s working on it and hopes to release it within the next year.

For any beginning rap artists, Str8jakkett’s advice is that you just have to know what you’re trying to do. He said that the most important part was having fun, whether it’s a hobby or a career.

“If you’re going to pursue hip-hop as a professional career, you gotta be prepared for the work,” said Str8jakkett.