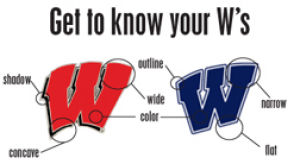 The University of Wisconsin-Madison decided to pursue legal action against Washburn University after determining that the Washburn “W” logo is too similar to UWM’s “motion W.”

According to an article published in the Wisconsin State Journal, the University of Wisconsin-Madison is accusing Washburn of “willfully, intentionally and maliciously” using the logo to “cause and enhance confusion.”

“We’re not trying to confuse the public so that a student would enroll here thinking they were enrolling in the University of Wisconsin,” said Jerry Farley, Washburn University president. “We do think that [our logo] is different enough that it will pass legal challenge.”

Dena Anson, director of university relations at Washburn, was rather confused by the entire situation, saying that any W will have certain inherent similarities, and the fact that the university was granted a trademark for the logo was proof enough that it is not infringing on UWM.

In addition to being a Division I school, UWM has an undergraduate population of more than 30,000. Washburn is not only in a different academic arena but athletic and geographical as well, said Farley.

“Perhaps we should be flattered with this, that somebody would think that we are the same as the University of Wisconsin,” said Farley.

Washburn has used the logo since 1995, when Tony DeMeo, then-head coach of the Ichabod football team, decided to reshape the image of WU football by setting in place the current “power W” which is now emblazoned on helmet, jerseys and countless pieces of merchandise.

Anson said initial contact between Washburn and UWM was made about six years ago concerning the use of the “power W.” In response to the complaints from UWM the W was changed to add, among other things, a flat bottom and a blue-and-white border around it. Also, any previous uses of the old logo were removed to the best of the university’s abilities. Lee Arena was re-painted to remove the offending letter, un-purchased merchandise was recalled and the university was effectively purged in an effort to comply with the requests of the University of Wisconsin-Madison.

“We thought we’d made a good faith effort,” said Farley.

While Farley is not happy with the situation between the two universities, he understands why the University of Wisconsin-Madison is protecting its logo. If something is trademarked, one must protect it or lose the right to the trademark, said Farley.

While as of press time Washburn has yet to receive an official statement on the lawsuit filed by UWM, Farley said he is confident that if the process does take Washburn to court, that they have done everything in their power to show that the intent of the university is not to infringe on anyone.