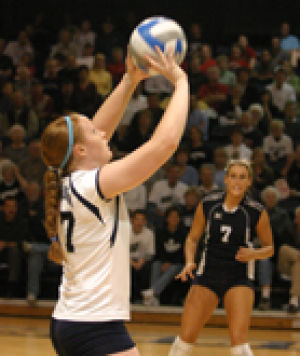 Before this season no Lady Blues team had ever advanced past the second round of the NCAA volleyball tournament.

But this is no ordinary team. Through the course of the 2007 season, Washburn won a conference championship, extended a winning streak to 27 games and earned the chance to host the final three rounds of the national tournament at Lee Arena.

After beating the University of Tampa, the defending champions and No. 1 team in the country, 23 hours earlier, the Lady Blues took the court for a Final Four match against Western Washington.

Unlike the night before, the Lady Blues won game one but ran out of energy late and finished in third place nationally after a 3-1 semifinal loss.

“I told them I’m disappointed that we lost, but certainly I’m not disappointed in the team,” said head coach Chris Herron. “We didn’t play very well tonight, but Western Washington had a lot to do with that.”

In game one it appeared the Lady Blues might have an easier match after having to fight back from a 2-0 deficit against Tampa. Although the 3-2 comeback win was impressive and put Washburn in its first ever volleyball Final Four, the Lady Blues dropped three straight games in a 30-23, 23-30, 26-30, 20-30 loss against the No. 15 Vikings.

In each of the four games, including Washburn’s game one victory, WWU jumped out to an early lead while the Lady Blues were forced to fight back point by point.

“We just couldn’t get momentum,” said senior Mandi Cox. “It’s not that we weren’t trying; everyone was trying very hard. It was just that we would get three or four points and then something wouldn’t go our way.”

Coming back from giant deficits may have been the story a night earlier for the Lady Blues, but a team can only have so much energy for comebacks in a 24-hour span.

“I felt like we were climbing uphill all night,” said Herron.

WWU took a 10-6 lead in game one and never trailed until Washburn went ahead 12-11. The Lady Blues went on a 12-1 run at that point and never gave the lead back in the first game. After winning four straight points to conclude game one, it appeared Washburn had the momentum entering the second game.

Instead, WWU turned to Jaime Anderson, its go-to athlete, and let her carry the Vikings to another lead early in game two.

“When they got in trouble, they went to [Anderson],” said Herron. “I don’t know if she hit a very high percentage, but she just kept swinging and swinging. Anytime you get 72 swings, you’re going to get a bunch of kills.”

Anderson, who also had 11 digs, took advantage of a Washburn team that fought hard but still looked tired after winning a five-game match.

“It wasn’t necessarily our fault but it just wasn’t our night tonight,” said Cox. “They played really well and we just couldn’t catch up.”

Throughout game two WWU countered every time the Lady Blues added a point, and down the stretch the Vikings consistently held a seven-point lead at which Washburn was unable to chip away. A kill by Monica Miesner gave the Lady Blues a 1-0 lead to open game three, but it was the only lead the team would have for the next game and a half.”Getting the momentum at the start of each game was huge,” said WWU head coach Diane Flick. “Washburn has a wonderful crowd. I’m so impressed. It’s not just the student body, but the whole community embraced them and when you can quiet a crowd early in the game, that certainly helps for your own momentum. It’s something we have to do for ourselves for the momentum. If we start that way, we can end it that way, too.”

Washburn’s 1-0 game lead was cancelled out by two straight wins by the Vikings, and suddenly the Lady Blues were faced with the same situation as the night before. Their backs were against the wall and one more loss would end an the team’s dream season.

A kill by senior Tessa Jones brought the Lady Blues from behind, giving them a 5-4 lead. An Anderson kill evened the score back up and a WWU error put Washburn back up by a single point. The 6-5 lead, however, would end up being the Lady Blues’ last of the season. WWU finished out game four on a 25-14 run, winning by 10.

“It was a hard match last night against Tampa, but everyone’s in the same boat at this point,” said Jones. “Everyone’s tired and everyone’s hurt. They just played really well.”

The loss ends the collegiate careers of Jones, Cox and Erica Cowhick, three seniors who helped take the Lady Blues further than anyone expected in years past. Few expected the team to compete this well at the beginning of the 2007 season.

“I may get emotional if I do this, but I can’t believe how far we came,” said Cox. “We played as hard as we could tonight and it just didn’t work out for us.”

The Lady Blues entered the year ranked No. 15 and rose steadily all the way up to No. 4. The team was previously unbeaten in Lee Arena, finishing the 2007 season 17-1 at home and 38-4 overall.

The three seniors will leave Washburn with their names among the best that have ever played for the Lady Blues. Tessa Jones’ 21 kills against WWU gave her a career total of 1,511, which is fourth all-time in school history. Mandi Cox added 11 kills, giving her 1,148 total in her career, which is 12th on the all-time list at Washburn. Erica Cowhick broke the school’s dig record last season, and ranks second in MIAA history with 2,464.

“It was a good year to be a senior,” said Cox. “I couldn’t be more proud of the girls. We had everyone jump on board. They all played hard, and that’s all you can ask for.”