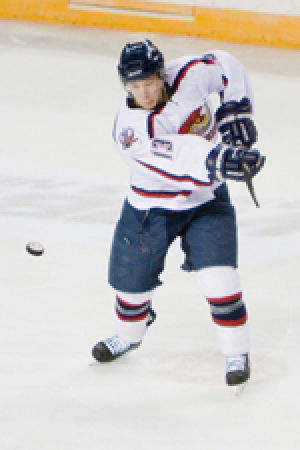 The Kansas Expocentre was hopping Friday night as the Topeka RoadRunners did something they hadn’t done all year. They beat one of the best teams in the country, the St. Louis Bandits, and did it by scoring seven goals.

Winning the game 7-4, the team got out to an early lead with two goals before the halfway mark of the first period. After St. Louis tied it up with two goals of its own, the final goal of the period came at 16:15 when Topeka took the lead for good.

Three more goals came in the second period by three different scorers as the team opened up a 6-2 lead on the Bandits. Also during the period the Bandits lost two players to ejections after fights.

Taking 11 more shots than the St. Louis hockey team for the game, the final period was the only in which the RoadRunners were out-shot, 14-8, and outscored, 2-1.

“St. Louis thought they could come out tonight and beat us by being rough and physical,” said coach Scott Langer. “The guys really stepped up to their challenge, though, and pulled out a good win.”

Goalie Bryce Merriam went all 60 minutes, making 20 saves on 24 shots. His counterpart, Cal Heeter, didn’t fare so well as he was pulled after the second period. He gave up six goals on 27 shots.

“We’re a defensively strong team, and we’re really big on our system so we don’t like to give up four goals,” said defender Aaron Gens. “But we got some offense on this team that is some of the best in the league. So overall, even though we did allow more goals than normal, the seven goals is good for us.”

Gens won Star No. 1 for the game with his five assists, quite a feat for not being an offensive position player. Those five put him at 21 assists and 26 total points for the year, ranked second on the team.

“I can’t say anything for myself because they were all assists and I never got one goal,” said Gens. “So I have to give all the credit to my teammates. Everyone came to play tonight. We needed to capitalize on our opportunities on the power play and that’s exactly what we came out and did.”

The game saw Topeka take advantage of their opportunities by scoring four of their seven goals off of the power play. Overall they scored on four of their 13 power play chances. They even managed one short-handed goal.

“Tonight I challenged the guys to come out against the No. 1 team in the country and they responded well,” said Langer. “We normally are a little slow coming out of the gates but tonight we were really strong.”

With the win Friday night the Topeka hockey club improved to 9-2-1 at home and 13-6-3 overall. The team now has 29 points for the season, which puts it in third place of the south division of the NAHL, only four points behind Wichita Falls.

“We wanted to go out and shock the world. We wanted to prove we’re the number one team,” said Gens. “We’ve made a lot of moves and everyone that we’ve brought in has made a big impact for us on this team.”

Corey Jendras and Matt Hartmann each had two goals on the night. Jendras now has 14 for the season, leading the team in goals and points, while Hartmann has eight goals through 20 games played this year.

“We’ve usually struggled on Friday nights coming out to play right off the bat,” said Gens. “But we came out tonight and put them to the test right away. We came out hitting and with our feet moving fast and really started the weekend how we wanted it to go.”

Saturday night the RoadRunners lost 5-2 and the Bandits were able to split the weekend series.

Going down two goals in the first period, the Topeka hockey team got within one goal in the second period but then allowed two more goals to the St. Louis team. The third period saw each team score one goal.

The RoadRunners were out-shot 24-25 and failed to score on eight power play opportunities.

The team’s next game is Friday, Dec. 14, against the Springfield Junior Blues at the Expocentre.