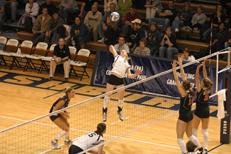 The Lady Blues were behind two games to none and losing big in the Elite Eight to defending champion and the top-ranked University of Tampa.

To make the first Final Four appearance in Washburn volleyball history, coach Chris Herron and his senior leaders knew they would need to pull off the biggest comeback possible in a five-game volleyball match.

Thanks to a record Lee Arena crowd, well-prepared coaching and a team of players who refused to quit, the No. 4 Lady Blues made a comeback that is virtually impossible to top in college volleyball.

“The matchups in games one and two weren’t working,” said Herron. “They were blocking the crud out of us. We have to do a much better job in that area.”

The Spartans took full advantage of the early mismatches by winning the first two games 30-24 and 30-22. Washburn was outblocked 20-3 in the match and never seriously challenged Tampa in game one. Despite staying close early in the second game, the Lady Blues were dominated once again after a late surge from their opponents. The score was tied 11-11 before Tampa regained the lead for good in what ended up being a lopsided 8-point margin of victory.

“Tampa’s just a really good team,” said Herron. “After game two, we started saying, ‘OK, how are we going to get matched up?'”

After preparing for the defending champions throughout Thanksgiving break and the week that followed, it was an in-game adjustment that gave the Lady Blues an advantage from game three on. Herron decided to flip the team’s alignment on the court, and Washburn’s 10 errors in both of the first games were reduced to one in game three.

“We were playing hard in the first games, but we knew we hadn’t played our best,” said senior Tessa Jones. “The confidence was there that if we played our best we could come back and win the next games.”

Jones played at a level that was not just a personal high, but also the best in Washburn history. She set a career and school record with 30 kills in the match while also tying a Washburn record by racking up 25 digs. Herron’s excitement for Jones’ rare 30-kill performance could not be contained, and immediately after scanning the stat sheet he asked the first-team All-American if she recognized what she had accomplished.

“That’s good,” said Jones to her coach, who was still smiling about the lofty numbers the senior put up.

Jones’ uninterested response to statistics showed how much more important the win was in what could have been her last match at Washburn. The team’s resiliency in the last three games showed the entire roster felt the same way. With their backs against the wall, Washburn erased their two-game deficit with an impressive 30-18 game three victory and a 31-29 nail biter in game four.

“We’ve been down 2-0 like this before to teams like Truman,” said Jones. “We have a lot of experience playing behind.”

The Lady Blues started off well in game three with the score 13-12. Runs of 5-0 and 5-2 helped Washburn run away with the most one-sided game of the night. Seven of junior Monica Miesner’s 18 kills came in game three along with three of her 21 digs. Miesner was well on her way to the 51st double-double of her career, while her teammate, Jones, tied a Washburn record with her 86th career double figure kill match. With the momentum suddenly shifting in the Lady Blues’ favor, the home court advantage showed.

“That was the biggest crowd I’ve ever played in front of,” said Miesner. “Even when we were down, they got behind us and got us pumped up.”

A record crowd of 2,231 were finally able to get into the game when the Lady Blues turned the tables on the Trojans and forced a game four. However, the fourth game started off similar to the first two and Washburn quickly fell behind by four before Herron called for a timeout.

“When it was 9-5 in game four, the crowd was the biggest factor for us,” said Herron. “I called a timeout to tell them we’ve got to get the crowd back behind us and cheering again. They were sitting on their thumbs for a while, and we needed to give them a reason to get back into it.”

The Lady Blues may have had trouble connecting for kills early on in the match, but by the end of game four sophomore Kate Hampson had already been credited with 54 of her 64 assists. There were eight ties and three lead changes in the fourth game, which could not be decided in 30 points. Kills by Jones and Miesner broke a 29-29 tie, giving Washburn a two-point victory in the game.

“In game four, we waited too long to call a timeout,” said Tampa head coach Chris Catanach. “To be honest, they did a better job of coaching in game four and after they won that game, the fifth game was almost academic with all that emotion they had.”

Senior Erica Cowhick had 9 of her 32 digs in the game, helping to complete the comeback and extend her career, along with Jones’ and fellow senior Mandi Cox. The three smelled blood after winning two straight games and started game five with a 6-0 run. Even when the Lady Blues finally had the luxury of building an early lead the team knew there was no time to relax.

“We knew that just as fast as we got up by six points, they could come back with six of their own,” said Miesner.

The two teams traded points, keeping the margin at six until Herron called for a timeout with a 13-7 lead.

“I didn’t want to call timeout in the fifth game,” said Herron. “We were up, but our kids were spent. We needed to get water and rest so we could go out there and play like we were up 13-7.”

The Lady Blues took two of the last three points to secure a 15-8 win and clinch a spot in the Final Four against Western Washington. Herron improved his career record to 2-2 against No. 1 ranked teams and the win improves the team’s record to 10-2 against ranked opponents this season.

“It’s not that we ever stopped Tampa, it’s just that we slowed them down,” said Herron. “We started hustling to balls and beating them in transition. That’s basically how I felt we won the match.”