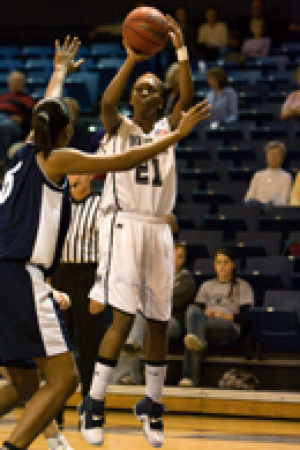 The weather was also dreary when the No. 3 Lady Blues basketball fell to the No. 12 Drury Panthers 66-47 Saturday night.

The Panthers continued the momentum in the second half, going on another 10-2 run to take the lead 38-26 with 10:15 left in the half. A jumper and free throw from senior forward Amanda Holmes, followed by a 3-pointer by Stiger, cut the Panthers’ lead to 40-32. But that would be as close as it got, as Drury rolled on to a 66-47 victory.

The Lady Blues get a week off before traveling to Miami, Fla., Dec. 18 and 20 for the Cruzin Classic.

“They’ve got to take their finals and focus on that, it’s a tough week for them,” said McHenry. “We as coaches understand that even though we want to make our team better. We’ll try to mix in some hard work and then some hard days of studying.”

The Lady Blues will kick off the classic with the Cameron University Aggies. The Lady Blues beat the Aggies twice last year 93-65, 89-66. The Aggies have struggled so far this year with a 1-7 record. But the lone win did come against Missouri Western 53-45, who was ranked No. 17 at the time.

“You just have to take one game at a time,” said Holmes. “I try to take every game in the same way. I go in and play as hard as I can and do what [McHenry] asks me to do. I try not to pay attention to their rank or record.”

The Lady Blues will finish the trip against the University of Central Oklahoma Bronchos. The Lady Blues haven’t played the Bronchos since 2005’s 96-59 victory. The Bronchos are 6-2 so far this year including a victory against No. 7 Emporia State 71-66 Nov. 24. However one of the Bronchos two losses came to unranked Pittsburgh State and the other to No. 20 West Texas A&M.

“It will be a good time for us to come together,” said Holmes. “We’re still a pretty young team that is figuring things out. We’ve got two tough teams ahead in Miami including one that beat Emporia. It will give us time to learn our stuff. We get better and better every day, so it’s just a matter of time.”