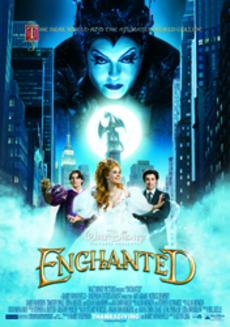 Traditional students at Washburn University have more than likely owned a “Beauty and the Beast” backpack and/or an “Aladdin” sleeping bag or had a “Lion King”-themed birthday party. This is nothing to be ashamed of, of course, but when watching the latest Disney movie, “Enchanted,” one realizes Disney does not make movies like they used to.

“Enchanted” starts out with an animated scene between Giselle, a fair maiden played by Amy Adams, and Prince Edward, handsome royalty played by James Marsden. This scene, while diabetic-coma-inducing in its sugary sweetness, also has some ironic pokes at Disney and their long history of fantasy romances full of periodic dancing about and bursting into song. Giselle and Edward are going to get married after a day of knowing each other, and Edward’s stepmother feels threatened because these two are going to take the kingdom of Andalasia from her. So, the evil stepmother pushes Giselle down a well into an alternate universe where she becomes three-dimensional and lands in New York City.

I’d rather be back in Andalasia with the singing turtles, too.

Giselle wanders around New York City without getting mugged or otherwise violated and finds a young-ish, handsome and jaded lawyer, Robert, played by Patrick Dempsey. Robert takes in the crazy woman in a wedding dress and, at first, tries to help her and thus get her out of his life. But in true Disney fashion, throughout mishaps and awkward situations, Robert begins falling in love with Giselle. Robert has been hurt by love before and sees Giselle’s love of Edward as silly. This is despite them both having a significant other; Giselle has Edward and Robert has a high-powered career woman, Nancy, played by Idina Menzel. As a sidenote, Menzel played Elphaba in the Broadway super-success “Wicked.” She’s got pipes on her like nobody’s business. However, throughout the entire movie, in which there are several musical numbers, she does not sing at all.

In the end, there is a climatic scene where the evil stepmother attempts to kill Giselle and her newfound love. In a wonderful little twist Giselle actually steps out of her princess role and plays the hero. While Disney has never shied away from women playing strong characters (see “Mulan”) this was nice to watch because the princess grew and discovered that she did not always have to be the one caught when falling.

I still have no idea who the intended audience was for this movie. I am glad this was not my first Disney movie, but having been a fan for some years it was nice to see a new one. This will not be a classic, hopefully, but it is a nice movie to go see with one’s mother, sister, aunt or grandma. Don’t pay the $8.50 to see it. See it at the $1.50 theater or rent it during Christmas break while you are impatiently waiting to open the presents under the tree, just like when you had the “Beauty and the Beast” backpack.