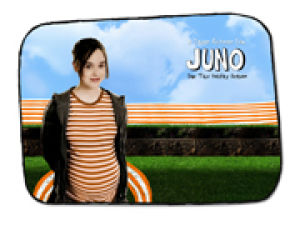 Easily one of the best indie fi lms of its generation, possibly the best of all time, few words can describe the tale of love and self-discovery that has set the world afl ame. Yet, one word has managed to do all that and more: Juno.

Straying from the typical “dumb humor” label that has attached itself to the one-time sensation “Napoleon Dynamite” and its many indie grandchildren, “Juno” is a wonderfully thought-provoking fi lm about high school pregnancy. Ellen Page mastered her role of Juno MacGuff, an offbeat adolescent who gets knocked up by one of her best friends, Paulie Bleeker. Bleeker, who is played by Michael Cera, is a timid high school track star who fi nds himself sitting in the right chair at the right time one night.

After drinking several gallons of orange juice and urinating on a variety of home pregnancy tests, the childbearing Juno decides that abortion is the best choice. However, when she enters the clinic she realizes that the choice isn’t the right one for her, and decides to have the baby and give it up for adoption.

After consulting her father Mac MacGuff, played by J.K. Simmons, and her stepmother Bren, Allison Janney, as well as her best friend, she decides the best course of action is to fi nd a suitable parent for the baby before giving it up. It’s really interesting to see the relationship between Juno and her parents, especially with her stepmother. While they have their differences, Bren always looks out for Juno’s well-being.

While searching for potential parents through the classifi eds she runs across Mark and Vanessa Loring, Jason Bateman and Jennifer Garner, respectively, and goes to meet the couple. After her encounter with the couple and a guitar jam session with Mark she comes to the conclusion they are the perfect couple to be the unborn child’s parents. However, the real questions are whether she can give up the child or if they are both indeed the best candidates for the baby.

The movie also boasts a catchy soundtrack, literally a medley of quirky artists with easygoing acoustic melodies that outline the story very nicely. In all actuality, the soundtrack has just as much to do with the story development as the actors do.

I’d strongly encourage anyone to see this movie. It has intelligent humor, which is more than most fi lms these days can say, as well as excellent acting by the entire cast. I believe Ellen Page may be one of the better actresses of her generation, and Michael Cera knows how to make the awkwardness of being a male in high school a hilarious thing.