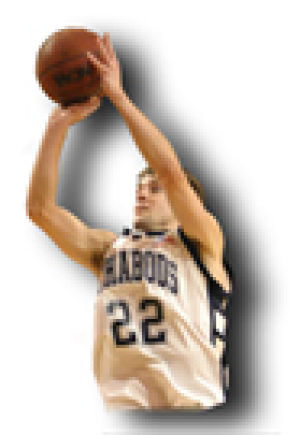 When Andrew Meile decided to become an Ichabod, he thought he was signing up for four years of conference championships and NCAA appearances.

In the 2004-05 season, Meile’s first at Washburn, the Bods were living up to the lofty expectations they had set for themselves. The men’s basketball program consistently competed for the MIAA title and regularly made trips to the NCAA Tournament thanks to the leadership of legendary coach Bob Chipman.

However, after winning a third straight MIAA crown in Meile’s freshman year, Washburn basketball’s reputation as a national power took a hit in the following seasons. In each of the next two years its record dropped below .500, the worst finish for an Ichabod team since 1977.

“It’s a great program with a great history,” said Meile. “We’ve struggled the last two years, but this is a talented team.”

When people take a look back at the team’s results in the past 30 years and see two Washburn teams with ninth- and tenth-place MIAA finishes amidst all the years of success, they will wonder what happened. Meile and his fellow group of senior leaders have taken it upon themselves to prove that those two seasons were just an aberration and are not a sign of things to come for future Washburn teams.

“It’s my last year being able to play here,” said Meile. “And I know all the other seniors feel the same way. We want to leave Washburn on a good note.”

With the team’s record currently sitting at 11-6, it appears Meile has put Ichabod basketball back on the upswing. Although the program has been on a rollercoaster the past four years, with some highs and more than its fair share of lows, the senior guard has remained a consistent contributor.

“Andrew is an invaluable player to have,” said senior forward Brady Sisk. “We’ve played here for four years together, and he’s been great for this team throughout his career.”

In his freshman season, Meile’s playing time was limited, but he still made it onto the court for all 32 of the team’s games, a trend that would continue all the way up until the present. With players like All-American Travis Robbins leading the 2005 squad to a 24-8 record, this year’s senior class of Meile, Sisk and Kyle Snyder saw just a few minutes of action in their first year at Washburn.

All three young players were thrust into more prominent roles in the following seasons but could not enjoy their roles as starters due to disappointing 10-16 and 8-19 records. In year two, Meile played in every one of the team’s 26 games and started all but a couple. The third year, his performance again improved despite the team’s mediocre record going downhill even further.

“I was playing more and starting,” said Meile. “But that doesn’t matter at all. You want to win, and that’s what we’re trying to do now. We want to overcome the disappointment of the past two seasons.”

Meile has given up the ball more in the 2008 season and in return Washburn’s many newcomers have followed him to an increased number of wins. His scoring average dropped from last season but Meile’s distribution to teammates has allowed a more balanced offensive attack. Sacrificing points for wins is just one example of how Meile has quietly established himself as a team leader.

“He’s a great point guard, and he understands how to lead a team,” said Sisk. “He’s not the most talkative, but he’s a great teammate, and having him as my roommate, he’s a great guy also.”

Meile’s willingness to pass the ball and recognition off to others has not taken away from what he has been able to accomplish in his four-year career as an Ichabod. While starting every game this season and never missing a game in four years, the sharpshooter has jumped to eighth on Washburn’s all-time list for three pointers made and attempted.

As he continues to move up the list of Ichabod greats, Meile insists the compliments be given to those around him.

“I credit my teammates more than anything else,” said Meile. “They get me good looks, and I just thank all the guys I’ve played with here for putting me in the right spots at the right time to make them.”

Playing four years without missing any games or many 3-pointers is a testament to the senior’s endurance and consistency. However, Meile would prefer his name be remembered at Washburn for reasons other than his personal accomplishments.

“It’s not really a big deal to me, making a certain number of threes,” said Meile. “I don’t look too much into that because I’d rather put my focus on winning a conference championship and making it back to the NCAA tournament.”

Now that they are on their last go-around the Ichabod seniors want to make it back to the postseason more than ever. The group has finally gotten the opportunity to experience the winning basketball they enjoyed early in their careers.

“We’ve been determined to bounce back this year,” said Sisk. “Andrew’s been our captain the last few years, and he’s done great.

“As a team, we want it more now, and his leadership has played a big part in that.”