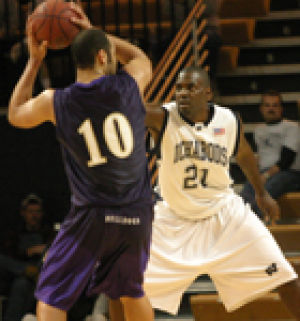 When the Ichabods leave Lee Arena, so does the certainty of victory.

Washburn’s perfect home record this season has been offset by the 2-6 mark they hold in road games. Unfortunately for the Bods, both of their games last week were played in the competition’s arena.

The road woes were especially hard to swallow when Washburn dropped a down-to-the-wire 82-81 shootout at No. 21 Southwest Baptist.

“It’s really tough to get a road win in this conference,” said senior guard Andrew Meile. “Everyone’s trying to do the same thing as us: protect their home court.”

Bob Chipman knew coming into the game that the Bods would need their recently improved team defense to come through yet again if they were to have a chance at knocking off the league-leading Bearcats.

A game with the score in the 80s may not have been the defensive contest Chipman hoped for, but last-minute threes by Angel Santiago and Kyle Snyder kept Washburn close.

A missed three by Santiago, who led the team with 18 points, could not be rebounded by the Bods and went out of bounds with 12 seconds remaining to seal a SBU victory.

“We’ve been really close to winning,” said senior forward Brady Sisk. “But we’re playing against some tough competition, and we just can’t get over that hump.”

One solution to losing close games is to not play in close games at all. It appeared the Bods would make this their strategy of choice Saturday at Pittsburg State, scoring the game’s first eight points.

However, the early advantage, which extended up to 11 in the first half, was quickly erased by a 14-0 PSU run.

“We came out playing as a team at the start,” said Meile. “But they answered with some big runs and we kind of put our heads down.”

The Gorillas’ lead grew from that point on, resulting in an 82-69 loss for the Bods.

“They came right back after we led at the start,” said Sisk. “We were in the game the whole time, but every time we got close they answered.”

The 13-point loss ended a streak of eight games decided in single digits for the Bods. Throughout most of the season, the MIAA standings have been a logjam that is separated by only a few games.

“It’s tough in this conference,” said Meile. “No matter where you are, home or away. Officials are a little against you on the road, but you just have to play harder and that’s something we need to be able to do.”

When teams are as evenly matched as the MIAA’s, a few breaks one way or the other can make all the difference. If the refs are to be questioned for their calls in Saturday’s game, it is not for being partial to one team.

Both sides attempted an overwhelming 33 free throws in the game. However, it was execution at the charity stripe that made an impact on the scoreboard. The game’s high scorer, Darnell Kimble, sank 10 of his 15 free throws, but aside from the junior forward’s contribution Washburn made only 11 free throws compared to PSU’s 29.

Waving arms and shouting students can distract free-throw shooters, but the Bods’ attempts from the field were not much better. The team made 38 percent of its shots, a result of the home team’s defense more than anything else.

“They were well prepared,” said Meile. “They knew what we were going to do, and they took it away from us. They picked up their defense and we stood around.”

Perhaps the best remedy for Washburn’s road struggles is to regain its confidence back home in Petro’s friendly confines. After playing eight of their previous 10 games on the road, the Bods make up for the unfavorable scheduling with seven of their final 10 contests in Lee Arena.

“It always helps to play at home,” said Sisk. “This conference is hard enough as it is, so having the home court advantage and your own fans here makes it that much easier.”