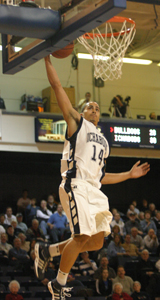 Bod of air WU senior guard Grant Hargett crams home two of his game-leading 17 points. Hargett was clutch with 13 of Washburn's last 20 points in the game. The Ichabods are now 6-0 at home this season.

Grant Hargett led the Ichabods in scoring with 17 points against Truman State, but it was his defense that sealed a victory down the stretch.

Two steals and four free throws in the last 20 seconds from the senior guard put the game out of reach for the visiting Bulldogs, giving the Bods a 59-50 win.

The game was tied at 49 with just 2:43 remaining before Washburn fi nally stepped up its play both offensively and defensively in a 10-1 run.

“We knew we had to pick it up,” said Kyle Snyder, forward. “We went out there at the end, and as a whole our defense was great.”

The Bods (11-4, 3-3) were not expecting the back-and-forth dogfi ght TSU gave them. They were forced to come back from a one-point halftime defi cit after struggling through 20 minutes of lackluster play.

“The second half we did a better job,” said Bob Chipman, head coach. “You’re at home, you want to be impressive, you want to blow somebody out and here we are in the last minutes, in the fi ght of our lives.”

TSU remains last in the MIAA, dropping to 3-12 overall and 2-4 in conference play. However, in the alwayscompetitive MIAA there is not much difference between the top and bottom of the league standings.

As evidenced by Saturday’s conference games, any given team can pull out a victory on its opponent’s court. Emporia snapped Central Missouri’s 31- game home winning streak, putting the Bods in a four-way tie for third in the MIAA.

“We’re getting there,” said Chipman. “Paul [Byers], Grant, Brady [Sisk] and Drew [Meile] are a great defensive group. It’s great to fi nally see them all healthy and back in action.”

If there’s one player on the Washburn roster who is most grateful to be logging signifi cant minutes on the court, it is Snyder, a senior who has had more than his fair share of injuries during the past few years.

Snyder has been able to play through a couple of setbacks this season and came up big for the Bods on the boards, snagging a game-high 11 rebounds.

“I was just trying to get every rebound I could in there,” said Snyder. “Everybody likes to score, but I don’t need to do that for this team.”

Chipman seconded Snyder’s opinions on the importance of doing things in games other than scoring.

“Our players like the offense, but it came down to the defense tonight,” said Chipman. “We were tremendous on the defensive side, but we kept missing those free throws and giving them a chance to stay in it.”

Seventeen forced turnovers and a 20- 4 advantage in bench points made up for Washburn’s nine missed free throws.

“It’s always easier to play at home,” said Snyder. “But we need to go out on the road and get a couple wins, cause we still haven’t been able to do that this year.”

Chipman hopes the Bods can capitalize on being healthy, something that has rarely happened over the past couple years, and steal a couple of road wins against stiff MIAA competition.

“We want to get everybody healthy, and everybody playing together again,” said Chipman. “Because we’ll need that D against Baptist.”