Blues take magnifying glass to Hornets, scorch them by 26 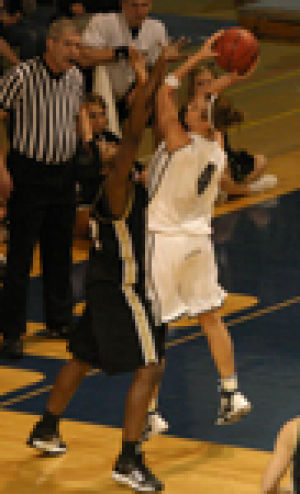 Even with a 19-point lead against Emporia State at halftime, Lady Blues fans couldn’t feel that comfortable Saturday.

The Lady Hornets always somehow manage to make a run that makes the Turnpike Tussle the final bucket spectacle it always is. But the run never came and the No. 17 Lady Blues cruised to a 78-52 win over No. 18 Emporia State.

“When you have that big lead in the first half you always worry about a letdown,” said coach Ron McHenry. “They’ve got so much firepower. It happened to us last year down at their place. I challenged the kids at halftime, ‘You’re going to predict that it happens, so start to predict that will make the big run in the second half.'”

The Lady Blues defense made the difference Saturday, holding the Lady Hornets to 25 percent from the field. Lady Hornet All-American senior forward Michelle Stueve was averaging 22 points per game going into the contest and only walked away with 12. Stueve went 2 of 12 from the field and seven of the points came from the free-throw stripe.

“[Janice Bright and Brette Ulsaker] worked real hard guarding [Stueve] tonight,” said McHenry. “They run flair screens with her and she’s either going to drive on you or shoot on you. She didn’t get too many open looks tonight.”

Junior point guard Jessica Mainz took the Lady Hornets’ second weapon in the arsenal away early. Cassondra Boston, Lady Hornet sophomore guard, is apt to put the ball on the floor when things break down offensively. Boston only had five points and hit 1 of 12 shots from the field Saturday.

“I knew if I could stop her the first couple times it would mess her up and she lost her confidence,” said Mainz.

The first half set the game’s momentum. The Lady Hornets had three buckets from the field in the last 15 minutes of the first half. In fact, Saturday night’s first-half drubbing would have been much worse if it weren’t for the free-throw line. The Lady Hornets went to the line 15 times, hitting 10 of them.

“We have a lot of games left,” said McHenry. “But at the same time I want the girls to enjoy this win. This game was a wake up call that we can be very good when we want to.”

The bench’s performance in the first half made the difference this past Wednesday as the Lady Blues avenged an earlier loss to Northwest Missouri 81-71. With Mainz as the only starter on the floor, the Lady Blues went on a 16-4 run to end the first half. Northwest Missouri senior forward Lauren Williams tied the game at 25 with 5:28 left in the first half, but the next Lady Bearcat bucket did not come until the 1:27 mark with a layup from senior guard Kelli Nelson.

“[McHenry] just wanted some people to step up,” said sophomore guard Brette Ulsaker. “On any given night anybody on our team can do it. We just got on a run, had some lucky breaks and hit some layups that helped us out.”

The surge from the bench gave the Lady Blues a 41-29 lead at half. McHenry was forced to go to the bench, with senior leading scorers guard Corkey Stiger and forward Amanda Holmes sitting with two fouls each.

“We were really struggling,” said McHenry. “[Stiger] didn’t look like herself out there and was in foul trouble. [Ulsaker] played extremely well. I kept on calling time outs to say, ‘Somebody has to step up and play here.'”

“[Fort Hays] is a very physical group,” said McHenry. “I like the way they have been playing. They haven’t had all the success they want this year and when that happens they show resilience. They are looking for wins and we have to be careful we are not celebrating too much.”

•The Lady Blues outscored the Lady Hornets 42-14 in the paint.

•The largest lead for Washburn was 28 points at the 4:21 mark of the second half.

•Amanda Holmes is one block shy of 100 for her career at Washburn, fourth all-time at Washburn.

•Holmes also had her team-leading fifth double-double of the season with 19 points and 10 rebounds.