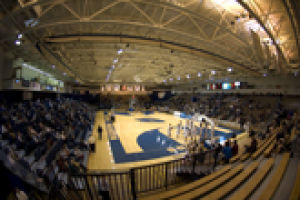 This winter has been a harsh one.

Not alone in being caught up in the storm of Mother Nature, the baseball and softball teams have to improvise to practice. Neither can get any practice time on their fields in the predominantly wintry conditions, so they have to retreat to the confines of Lee Arena and Whiting Fieldhouse.

The problem is, there are still two Washburn basketball teams playing at full tilt in the heart of their respective seasons.

Scheduling among basketball games and practices and trying to fit in practice time for the baseball and softball teams has become a balancing act coordinated through Herrera. The basketball teams get preference on practice times because their seasons are in progress. Herrera said men’s basketball usually takes the court in Lee Arena for practice around 2:30 p.m. and the women’s team around 4 p.m. on any given weekday. That leaves only the early morning hours in Lee Arena for baseball and softball or evening hours because of student athletes’ class schedules.

“It’s one of those things, we’d love to be outside. But we’re pretty fortunate to have a facility like Lee Arena,” said baseball coach Steve Anson. “It’s pretty big for our preseason preparation.”

Anson said he likes his team to practice more in the evenings.

“The thing I like about that [is] sometimes our pitchers take longer to get their bullpens in so we can go longer and have flexibility,” said Anson.

Another benefit of practicing in Lee Arena is the team can work on running their defense and simulate situations to make up for some of the things they can’t do indoors.

“The one thing you don’t get is any flyballs and pop-ups,” said Anson. “But we can at least spread out and throw at 90 feet. We can run relay drills in the outfield.”

And when baseball or softball does practice in Lee Arena, the basketball teams need not worry about damage to the court.

“The finish is pretty tough [on the court],” said Herrera. “Softball has a ball that’s more spongy and they use that, but it doesn’t damage the floor at all. Baseball is the same way. I mean, sure, you’ll get a little ding, but they come right up.”

The court floor may be mostly immune to damage from errant baseballs and softballs, but gym windows are not so fortunate.

“Last year I think we lost one [of the gym door windows],” said Herrera. “There was one year, I think it snowed like crazy, five or six years ago where they really couldn’t get out at all. And I think we did lose a few that year.”

All in all, having coaches work together is preferable to spending frigid hours outside or not practicing at all.

“They work really good together and it makes it easy,” said Herrera. “If you have to adjust, you adjust. I’m sure there’s been a day or two where it’s been a little hairy but they got through it.”