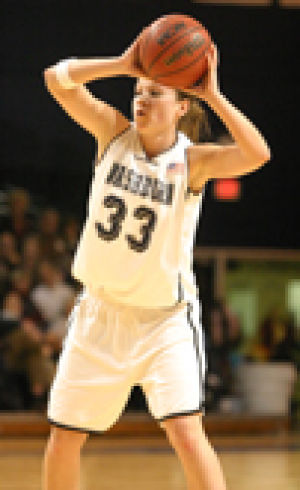 “This win tonight was a really big confidence booster for our team, especially with the conference being so close,” said junior forward Kalee Silovsky. “It keeps us in the running for a potential chance at the conference championship.”

After ending their 17-game home winning streak earlier in the week with a loss to Missouri Southern, the Washburn women had lost two out of three and moved out of the top 10 in the USA Today/ESPN Division II Top 25 Coaches Poll for the first time in four years.

“This win was good for us because we don’t get beat at home,” said Silovsky. “When we lost to Southern it was kind of rough, so it was good coming back and winning by so much. It’ll carry us into another road game with some confidence.”

The Lady Blues never trailed once in the contest, leading by several double digit margins in the first 20 minutes including a halftime score of 37-21. The Washburn women shot better than 40 percent for the half and an even better 6 of 14 from the 3-point line (.429).

The second half saw more of the same as the Washburn women’s team emptied their bench late and gave all 13 roster players time, including sophomore Jacki Tipping and freshmen Hadleigh Meek and Emily Gibson.

“We always try to get off to a good start and kind of put the game away early,” said junior guard Janice Bright. “That way we’ll be able to get a lot of rest and get some of the other players more time.”

Missouri Western was at a definite disadvantage with only eight suited up to due injuries and other issues. After they lost freshman guard Lauren Nolke early to an ankle injury, the Griffons were down to seven and lacked the depth needed to hang with the Lady Blues.

“This game wasn’t as physical because they [Griffons] didn’t have enough people to play that style,” said Coach Ron McHenry.

The win moves the Lady Blues (15-4, 7-3 MIAA) into a three-way tie for the conference lead with Southwest Baptist and Emporia State.

Missouri Western moves to 9-9 overall with a 4-6 conference record. The Griffons lost the season series to the Lady Blues and have lost three in a row to Washburn dating back to last season.

The Washburn women’s basketball team is now 8-1 and will travel Wednesday to Joplin, Mo., to play Missouri Southern for the second time in a week.