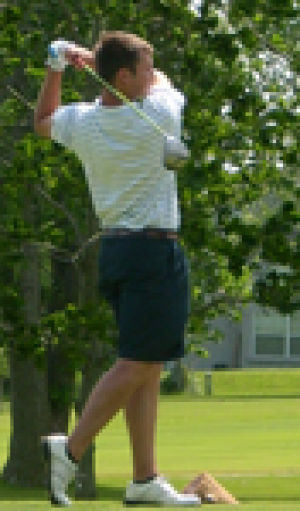 Spring is a time for new beginnings and a fresh start to the year.

However, the Washburn golf team needs none of that as it hopes to continue the tradition of winning the NCAA Division II Central Regional and advance to its fifth NCAA National Tournament in six years.

The Ichabod golfers had a productive 2007 fall season. They won three of five tournaments ,including the Fort Hays State Invitational, where they rallied to win in dramatic fashion.

“We went into that tournament wanting to win, obviously,” said junior Matt Ewald. “We put ourselves in a bad situation on the first day being behind Central Missouri. And then even on the first nine holes of the second round, our team didn’t quite do what we needed to do to put ourselves in a position to win. In the back nine though, we had a lot of great low scores as a team. Coming down the stretch our team made a lot of putts and we ended up pulling it out, which for the team I think is big. It could possibly carry momentum into the spring and into our conference tournaments.”

The spring season begins March 10 with the Southern Cal Intercollegiate at the Marbella Country Club in San Juan Capistrano, Calif.

“We hope to accomplish what we did last year,” said sophomore Matt Lazzo. “We want to get some tournament wins. Our main goals are to win the conference, get back to nationals and make a better showing than we did last year.”

With each MIAA golf tournament comes more pressure for the Ichabod golfers to do well.

“We go into each conference tournament having confidence that we can win it,” said Lazzo. “We have to have that same level of confidence when we go to California to start the year off because that’s where all the real good teams in the country are.”

One of the many strengths for the veteran golf team is its depth.

“We’ve got six or seven guys that can go out and play well on any given day,” said junior Matt Salome. “It just depends on who gets hot. Our guys can back somebody up with good play if others are not necessarily playing as well as they’d like.”

There aren’t a lot of noticeable weaknesses for the Washburn golfers, but living in Kansas doesn’t help them any.

“A weakness for our team could be that we haven’t played in a while,” said Lazzo. “A lot of the teams we’re going to start off playing in the spring have been playing year-round because they’re in California and Florida. We’ll just have to get out there when it’s warmer and shake off some of the rust.”

The Washburn golf squad has won an impressive seven straight MIAA points events and hopes to keep the streak going in the spring.

“I think it’s (the streak) important to everyone on the team,” said Salome. “I wasn’t here last year, but I know how important it was to the guys that were here. And I think it’s a big motivation for us adding up to nationals and the bigger tournaments.”