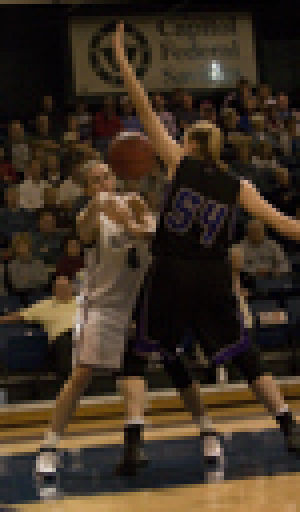 One could argue that this is the most important week in the No. 18 Lady Blues basketball team’s regular season. But with only four games left to the season, the Lady Blues are making each game count.

“It’s the end of the year and [head coach Ron McHenry] tells us everything counts, except double,” said senior forward Amanda Holmes. “If we want to be successful in the postseason we have to take it now and play hard every single game. Every one of my teammates is taking it as a challenge and we’re stepping up.”

Holmes recorded a double-double this past Wednesday with 18 points and 11 boards, avenging a previous loss to Southwest Baptist earlier in the year, 74-62. Holmes was one of four players to score double figures for the Lady Blues.

“I told the girls that was a good game,” said McHenry. “Just a couple of good basketball teams and good players playing against each other. Both teams guarded hard, ran the floor hard and rebounded hard. It’s kind of one of those basketball games where you sit back and watch and hope you win the thing.”

Wednesday’s victory knocked Southwest Baptist out of a three-way tie for the conference lead with Emporia and the Lady Blues. The Lady Blues remained tied with Emporia after securing a 80-75 victory against Truman State Saturday as the Lady Hornets defeated Central Missouri 83-65 later in the day.

“Everything in February counts,” said McHenry. “They’re all big games the rest of the way. Before the [Southwest Baptist] game we were tied for the conference lead, and still are. We kind of stayed where we were. You just don’t want to go backwards now because it’s hard to catch up.”

The Lady Hornets are on a seven-game winning streak and are 17-5 this season, 5-3 in conference. The Lady Hornets’ streak has been driven by All-American senior forward Michelle Steuve. Steuve became the MIAA’s all time scoring leader in an 88-67 victory against Northwest Missouri Feb. 7 and averages 22 points per game. But the Lady Blues defense has been on as of late, holding the league’s highest scoring offense, Southwest Baptist, to its second lowest point total of the season Wednesday.

“Baptist is a really good basketball team and you have to play every set,” said McHenry. “That was the thing I was most proud of tonight. We played every set with purpose. They are one of the highest scoring teams in the country and to hold them to that number tells a lot about our kids.”

The Lady Blues forced the Lady Hornets to turn over the ball 24 times in their prior victory against Emporia 61-54 Jan. 9. But to make sure the game is still for the conference lead the Lady Blues are not about to forget about Northwest Missouri.

“We just have to take it a game at a time,” said Holmes. “We have to just take the challenge of playing every game hard and well.”