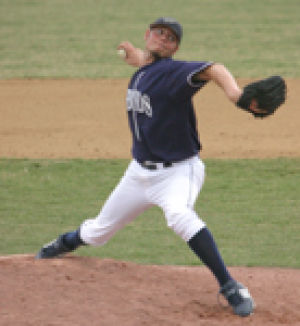 Many players on the Washburn Icahbod baseball team wish it could be spring year-round. Then the snow would go away and they could get in some decent time out on the field.

“We’re just really anxious to be able to get outside after being kept inside for so long,” said senior pitcher Bryan Stroth. “With all this cold weather, we’re just hoping it’ll clear out so we can practice on our new field.”

The Ichabod season begins at noon Friday when the Lopers of Nebraska-Kearney come to Washburn to play a doubleheader.

“We haven’t played Nebraska Kearney in a while but the Nebraska teams are usually pretty good,” said senior infielder Tyler Blankenship. “It’ll be pretty good competition.”

The Washburn baseball team has another doubleheader noon Sunday when they host Wayne State. Wayne State is the defending Northern Sun Conference champion and has been picked to win it for the fifth straight year.

“I think it’s a good thing that we’re starting out against good teams, just to test where we’re at physically,” said Stroth. “Then we can go ahead and build off of that after seeing how we do for conference play.”

The Ichabods wrap up their homestand with a 1 p.m. doubleheader Feb. 28 against Bemidji State.

“I think these first three games at home will hopefully build a lot of confidence in us,” said Stroth. “Hopefully we’ll get a couple wins and help us build momentum as we enter into the bulk of our season.

“I know we go to Central Missouri for a tough tournament in a couple of weeks. And it’d be great to get these games in before we actually go up there and play because we’re going to be playing pretty good competition.”

The MIAA conference play does not begin until March 14. However, it is still on the minds of many of the players.

“Our conference is very strong and usually it has the best teams around the whole nation, so it’s very strong competition,” said Blankenship.

With six seniors on this team, leadership should help the Ichabods have success this year.

“As a senior, I know all of the seniors are really excited to get going in their last year,” said Stroth. “It means a lot to be a senior and feel like you have to set by example and show the other guys how much it means to prepare hard and try your best and try to win.”