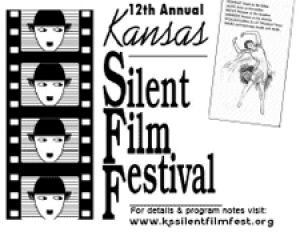 Technology has almost made modern society forget about the joy of simplicity in the past. In the early 1900s silent films were all the rage. For the 12th consecutive year Washburn University is bringing the popularity of the past to the present. There will be silent films galore Feb. 22 and 23 at White Concert Hall.

Bill Shaffer is the producer and director at KTWU and is pleased to be involved with the Silent Film Festival for his tenth year. He said the Topeka and Shawnee County Public Library and Washburn used to do a combined effort to bring this festival together, but a few years ago the library gave up its involvement.

During the first and second year that Shaffer was involved in the program, he had already started playing a vital role with organizing and directing it.

“The third year I found myself basically running it,” said Shaffer.

As the director of such a big event, Shaffer can’t do everything by himself. Denise Morrison has been the hostess for every year of the festival’s existence. She introduces every film before it shows. Along with Shaffer, Morrison has an undying love for silent films.

The festival used to have non-stop showings of films on Saturdays from about 9 a.m. until 7 p.m. It’s now broken up into sessions. Friday night showcases three comical films starting at 7 p.m. and lasting until around 9 p.m.

Saturday morning is geared more toward family films. Three films will start at 10 a.m. and end around 11:45 a.m. so that the audience can break for lunch before the next segment at 1 p.m.

Shaffer said that Saturday afternoon will be dedicated to adventure and drama films. This session will last from 1 p.m. until about 5:30 p.m., with a break in the middle.

Finally, starting at 7 p.m., the World War I theme will be presented through three silent films. The focus of the evening is the 90th anniversary of the end of WWI in 1918. The final film that will be shown on this night is called “The Big Parade,” which was made in 1925. It takes the audience into the war through the eyes of a soldier.

The Silent Film Festival features live musicians during each film, so the films are not 100 percent silent. A hired organist, pianist and small orchestra will play alongside each silent film. Shaffer said that part of the excitement is watching and listening to the live music.

“You just kind of lose yourself in it,” said Shaffer.

The main reason the Silent Film Festival is such a great event is that it introduces silent films to modern audiences and allows older folks to relive the films again.

There are usually between 250 and 300 people on Friday night and close to 800 on Saturday night. The audience is quite diverse, with both young and old people coming to see these films.

He’s hoping to break the 1,000 mark soon. The event is completely free to the public because it’s sponsored and supported by film fans and organizations around the state of Kansas.

“They make it possible to be a live event,” said Shaffer.

Most Washburn students would benefit from attending the Silent Film Festival, as many students don’t have any idea what these films are really like.

“Any student who is interested in film must attend just to see how they were done,” said Shaffer.