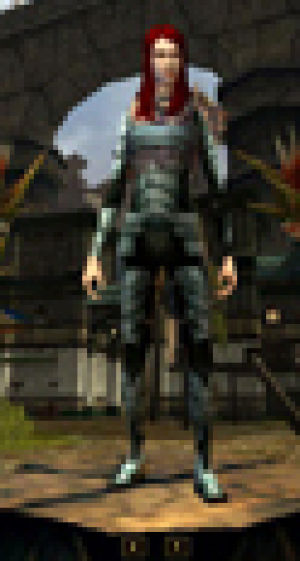 MMORPGs, or Massively Multiplayer Online Roleplaying Games, have been widely popular for more than two years. For the purchase price of the game and a monthly fee, players get an ever-changing environment where they can interact with across the country, continent or even the globe.

While there are sci-fi MMORPGs set, fantasy themes dominate the field. Of these, the solid frontrunner is World of Warcraft with 10 million subscribers worldwide. However, I thought it was time to ignore the elephant in the room, so to speak, and get a quick look at what else the MMO market had to offer for the genre. To that end I tried out three games: “Dungeons & Dragons Online: Stormreach,” “The Lord of the Rings Online: Shadows of Angmar,” and “Final Fantasy XI Online” with all four of its expansions.

I began with this title, based on the tabletop role-playing game Dungeons & Dragons; specifically, its latest campaign setting, Eberron. Like many other MMOs “Stormreach” offers a free trial on its Web site, www.ddo.com. With a small file size and a character account program that didn’t require the use of a credit card, “Stormreach” started out with bonus points.

The first snag came during character creation. At first I was excited. Not only were there many customization options, with multiple variations in hair color, eye color and even nose shape, the character stats and abilities were in the regular D&D terms with which I was already familiar. Any race could play any class, though with racial variations in stats some choices were better than others. But of the nine available classes, only three were considered viable for solo play.

That tiny problem became a big one once my shiny new human paladin emerged on to the social scene. One look at players running around with colorful character names like “Throbbin hood” and “Smellypants” and suddenly, group work became a dismal prospect. There were people with less anachronistic handles, but from what I could tell nobody seemed to be talking to one another anyway.

Even as a solo-capable class the game play wasn’t too impressive. The quests were boring and linear, with a voiceover describing in vivid detail the particular environment of whatever sewer or warehouse in which I happened to be. This became distracting as well as annoying. Warnings of imminent traps popped up onto the screen, only to vanish forever when I retreated from the danger zone to try and figure out what was going on.

The combat system was abysmal, requiring the use of the mouse’s right-click button, number keys, and the Shift key for blocking in a medley that would require three hands to successfully execute. The blocking system was particularly awful. The instant I saw my computer-generated opponent start to swing I hit the key, but a delay between my computer and the virtual world ensured that unless I was constantly holding down the key I got clocked every time. Finally I resorted to a furious barrage of right-clicks, hoping repetitive beatdowns on my part would override my inability to defend myself. Thankfully, it worked.

Unless someone’s a die-hard fan of D&D or the Eberron setting, “Stormreach” couldn’t really pull an audience in. It might work to waste some time for a day or even a week, but I wouldn’t pay $14.99 a month to continue the experience.

While “LOTRO,” as it’s called, shares the Turbine system with “Stormreach” and some interface similarities, the gameplay experience differed greatly. Based on the Tolkien books rather than the movie trilogy, those hoping to find Orlando Bloom lounging about will be severely disappointed.

When I finally got to create my character after a long download and patching process of the trial on www.lotro.com, I was mostly pleased. My only quibble was certain stats, such as morale, varied between races but were not explained in the creation process. Eventually, I learned that morale was the equivalent of health, which might have been nice to know. Otherwise, while certain classes were unavailable to some races the role of each class was explained well. The customization was great, with the added quirk of regional differences among races. One female human minstrel later, and I was ready to rock into Mordor.

I thought the quest system was a great blend of independent movement and gentle guidance through the world. With a main quest line supplemented by random quests from various people I had the option to stick to the story line, travel the area a bit or, if I was so inclined, stand in a field and kill wolves for hours on end. The combat system relied mostly on the row of number keys on the top of the keyboard, with the option of other key bindings once one’s abilities increased beyond the 12 available slots. As I traveled along I was particularly happy I had chosen the minstrel class, with its healing abilities supplemented with “ballads” which improved my combat abilities as they damaged my opponents. Long story short, I was able to kill monsters with a mandolin.

“LOTRO” was easy to learn, fun to play and gave me a general sense of freedom as I traveled across Middle-earth. The element of an overarching story and quest line gave me a compulsion to want to continue playing and uncover more of the plot line. If and when the story line ended, however, I think the game would lose some of its appeal.

Final Fantasy XI Online, plus expansions – $12.95/month plus $1 for each additional character

Though I searched the Internet I was unable to find a downloadable trial for “Final Fantasy XI,” part of Squaresoft’s “Final Fantasy” empire. From what I gathered, trial keys could only be obtained from a friend who had purchased the game or through a promotional deal with Logitech and Alienware. Fortunately, a friend of mine was able to bail me out. As I went through character creation on his account I began to understand why one needed a friend for a trial key: without a game guide or a knowledgeable buddy playing “FFXI” would be hopeless.

Character creation was much more basic than in the previous two games. I bypassed the more basic races, like Hume, or human, and Elvaan, or elf, in favor of the ridiculously cute Tarutaru. After visual customization, which was less varied than the previous two games, I was ready to choose my “job,” or character class. As in “Stormreach” all of the jobs were available to all of the races, though apparently at level 30 other classes can be unlocked. As one’s starting class can dovetail nicely with one’s new class, looking ahead is a good idea, especially since you have to pay more per month for extra characters.

In the starting city, one can either go to a gatehouse for official city quests, help random townsfolk or go outdoors to attack random monsters. Sounds simple, but unless you know exactly what commands to use and how to bring up the right menu option your starting weapon will never leave your inventory. Another thing to keep in mind is that “FFXI” is not designed for solo play at all. On my first available quest I was already encouraged to “bring some friends along” because of the apparent difficulty. The economic system is also player-driven, with individuals setting up shop by standing in major cities.

Another point of contention with “FFXI” is the loss of experience points upon death once your character reaches level five. If you die enough times you can even lose levels. This was one of my main complaints about the game, especially since random monsters wander around waiting for tender young players to pass by, relentlessly attacking no matter how far you run.

If this already sounds too complex then back away now, because at high levels it gets much worse. The cardinal direction one’s character faces during a crafting process determines the result. The day of the week determines if a summoner will be able to easily subdue certain monsters or whether those monsters will be stronger than normal. I appreciated the level of detail but at the same time it was pretty overwhelming.

Despite its complexity compared to “Stormreach,” “LOTRO” and pretty much anything else on the market, the world of “FFXI” is so unique and detailed that I was tempted to make a return. I wouldn’t recommend it as a first MMO experience or a temporary distraction, but if you’re got the time, the energy and someone to show you the ropes, “FFXI” could be fun to the point of addiction.