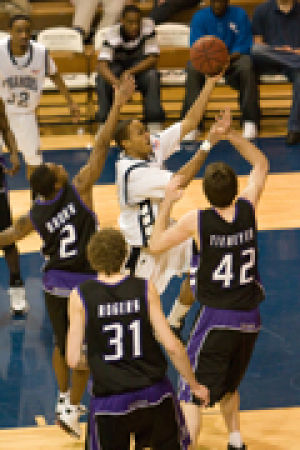 For the past two and a half years the Ichabods have been trying to climb out of the MIAA’s cellar and compete with the conference’s best.

Last week, with wins against league leader Southwest Baptist and Truman State, the Bods (15-8 overall, 7-7 MIAA) made that leap and placed themselves in the thick of the conference race.

Beating SBU 71-68 put Washburn in a four-way tie for fifth in the MIAA and sparked a sudden rise in the standings.

“We wanted to get them back playing on our home court this time,” said junior guard James Williams. “We lost there by one, and we felt like we could have won that game.”

Seniors Kyle Snyder and Andrew Meile both set career-highs in scoring against the No. 15 Bearcats, who are still in first with an 18-5 record. The two combined to shoot 71 percent, with Snyder hitting 8 of 9 shots for 19 points and Meile making 7 of 12 for 25.

Their hot hands, along with Snyder’s career-high 14 rebounds, made up for an otherwise bad shooting night from the Bods and helped Washburn build a five-point lead at halftime. That lead grew to 12 before SBU answered with a 10-0 run to tie the game with 8:46 remaining.

Three-pointers from Snyder and junior Grant Hargett ended the Bearcat run and gave the Bods a six-point lead they would not give up.

“We feel more confident as a team now,” said Meile, who scored seven in the game’s last 4:14. “We think we can win now when it’s close at the end like that, especially playing at home.”

Clutch performances like Meile’s have come often at home for the Bods this season, and are the reason the team has pulled out so many close victories in Lee Arena. It’s the road games that have kept Washburn in the MIAA’s bottom half throughout conference play.

Fortunately, when Washburn took to the road this time it was for a winnable game at last-place Truman State. The Bulldogs (4-19, 3-11) put up an early fight, taking a 16-11 lead, but were unable to upset the surging Bods in a 61-54 Washburn win.

“I felt confident we’d be able to pull it out, even though we fell behind early,” said Williams. “Our defense was good. They were just making all the tough shots at the start.”

The Bods scored the next nine points and finished the half on a 21-5 run to build a 10-point lead after the first 20 minutes. Despite shooting under 40 percent for the game, Washburn kept extending their lead in the second half.

“We had a lot of different guys play well tonight,” said Meile. “Our forwards all had big games again.”

“It was huge for us to have those guys scoring down low,” said Williams. “There are so many guys on this team who can step up on any given night. You never know who it’s going to be, and that makes it real hard to play us.”

Mario Scott hit back-to-back layups for four of his 12 points, giving Washburn an 18-point lead that TSU could not overcome. The Bulldogs did chip away at the lead late and prevented the blowout by getting within seven in the game’s final two minutes.

“We had to sweat it out there for a while,” said Meile. “They were able to put it in doubt at the end there, but we knocked down some free throws and secured the win.”

“We knew we couldn’t come home from Truman with a loss,” said Williams. “It was pretty much a must-win for what we’re trying to do. No matter what, getting that third-straight win was our priority.”

If the winning streak hits seven the Ichabods will enter the postseason as one of the hottest teams in the country, a goal within reach with three-straight home games coming up. Beating Northwest Missouri State, Emporia State and Fort Hays State at home would make the Bods’ 9-1 home record, as well as their tournament resume, even more impressive before heading to Central Missouri for the regular season finale.

“We need to win the rest of our games,” said Williams. “With our next three being at home, we have the opportunity to do that. That’s what we have to do to make the tournament, and I think with the way we’re playing it can happen.”

The Bods play NWMSU Wednesday with hopes of gaining a game on the Bearcats’ 9-5 conference record and their third-place spot in the standings. Saturday’s game will be against ESU, who is currently one game behind the Bods and always puts up a fight no matter who holds the advantage in the standings.

“This team’s really talented,” said Meile. “It’s been a struggle for most of the conference season but we’re starting to play up to our ability, and hopefully we can finish this season strong and get into the NCAAs.”

When the Bods played the same four teams earlier this season they beat UCM by six, lost at ESU by five, won at NWMSU by five and lost at FHSU by one on a 3-point buzzer beater. Washburn is certainly good enough to play its remaining competition close, but needs to come away with the wins in order to advance to the big dance.

“We’ve got to keep winning,” said Meile. “It’s almost do-or-die from here on out. We’ll have to win the rest of our games or else the conference tournament to make it, but if we keep playing like this we can do it.”