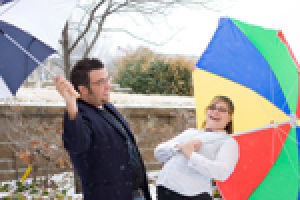 It’s the feeling shared by both Vince Bowhay and Lacey Keller, president and vice president of the Washburn Student Government Association, as their term in office comes to a close. As graduation appears on the horizon for these two seniors, there is much excitement coupled with an equal amount of sadness.

“We’ve worked hard, and of course there’s always the worry about whether or not the things we started are things that will be continued in the future,” said Keller.

As president and vice president of WSGA Bowhay and Keller have led an administration that has widely catered to the students as well as the campus. With a slogan of “Your Money, Your School, Your Experience,” the duo worked diligently from beginning to end with an overall goal of accomplishing what they originally promised students.

“One of the things I’ve enjoyed most during my time as president is meeting people who respect our ideas and then showing them that we can and have followed through with their wants and desires,” said Bowhay.

Their progression and improvements were noticeable, specifically in regards to the student-initiated idea of free printing in the Mabee Library. Although the idea put a strain on the WSGA budget, a large amount of students utilized and benefitted from the positive adjustment.

“It was an opportunity to show the campus that WSGA funds can be used to initiate ideas,” said Keller.

Attributing a large portion of their success to their staff and senate, Bowhay and Keller expressed their feelings of gratitude at the opportunity to work with well-prepared people who shared and desired the vision of their administration.

“Being on board and in agreement with 45 people along with the executive staff of the university has proved to be one of the more challenging parts of this job,” said Bowhay.

For Keller, the largest challenge has been managing herself.

“In this job, you’re your own boss,” said Keller. “If anything screws up it’s my fault and my fault alone, and holding myself accountable has been tough.”

Through the occasional struggle has come success, and through success has come a large opportunity of growth for the duo. Bowhay views himself as more driven and determined than he was at the beginning of his term.

“I’m more open to the ideas of others and I have become quite experienced in regards to time management,” said Bowhay.