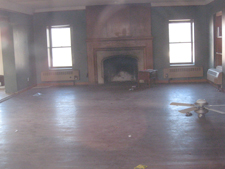 On March 6, 1909, the Gamma Nu chapter of the Kappa Sigma fraternity was chartered at Washburn University. Not only is Kappa Sigma the oldest Greek organization on campus, according to member Grady Woodruff it is the oldest student organization still in existence at Washburn. Unfortunately that may change as of Feb. 9.

During winter break the Supreme Executive Committee of Kappa Sigma revoked the charter of the Gamma Nu chapter, possibly because of decreased membership. With the aid of local alumni and the full support of the Student Activities and Greek Life office, Kappa Sigma is appealing the decision and a final decision is expected Feb. 10.

“My hope is that whatever decision is made is in the best interests of the students at Washburn,” said Jessica Neumann, SAGL assistant director.

Kappa Sigma has had a few rough years, including losing their house and a decrease in membership to the point of having one active member. If the decision is overturned and the chapter remains open, there are already a few students who are considering joining, says Neumann.

Kappa Sigma is no stranger to overcoming adversity, though. In 1907 the local chapter, Kappa Theta, petitioned to be chartered by Kappa Sigma. Despite William Allen White’s signature on the petition, the chapter was denied due to the fraternity’s size.

After their charter was awarded in 1909 Kappa Sigma didn’t have size troubles for very long. In the almost 99 years that Kappa Sigma has existed at Washburn it has initiated more than 1,330 men.

Founded Dec. 10, 1896, Kappa Sigma has had quite a history, with approximately a quarter million men initiated nationwide. Among these are Alan Mulally, president and CEO of Ford Motor Company; Robert Eaton, the former chairman of DaimlerChrysler AG; Senator Bob Dole; and Chuck Dobson, former pitcher for the California Angels. Those are just members from the University of Kansas chapter.

“As far as the current situation, nothing is official since the appeal is outstanding,” said Woodruff. “We won’t know until Feb. 9 whether we will maintain our charter.”