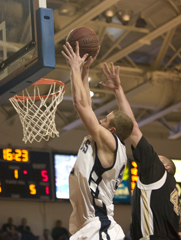 The Ichabods must have a KTAG, because Saturday’s Turnpike Tussle ended up being nothing more than a quick stop on the road to postseason play.

Most games in the Washburn-Emporia State rivalry go down to the wire but the Bods had little trouble snapping their five-game losing streak to the Hornets in a 76-58 win.

WU was able to win its fifth straight game by a comfortable margin thanks to a 15-point advantage in the second half.

“That’s the best thing you can do,” said junior forward Paul Byers. “Just get the lead in the second half and run away with it.”

The Bods, who are17-8 overall and 9-7 in the MIAA handed ESU (11-14, 6-10) its fifth straight loss despite clinging to a 38-35 lead at halftime. After the Hornets opened the second half with a 3 to tie the game, the Ichabods used some second half adjustments to re-establish the lead and fix their early problems.

“The first half we were a little bit uptight,” said coach Bob Chipman. “We were kind of struggling defensively and they just kept going around us. I don’t know how we were ahead.”

The lead went back and forth for the game’s first 15 minutes with seven ties and six lead changes in the first half alone. The back-and-forth contest turned one-sided, however, once the Bods got settled in late in the game.

“The second half we played better and shot more from the perimeter,” said Chipman. “They couldn’t score on us in the second half. Our defense was really good.”

Senior Grant Hargett knocked down two 3-pointers to score Washburn’s first six second half points and give his team a lead they would hold for the remainder of the game. Senior Andrew Meile and Byers each hit threes of their own to give the Ichabods a seven-point lead and put the Hornets in an insurmountable

“Ball movement was the key tonight for us,” said Byers. “They doubled the post in the second half, and we did a better job of passing it back out and hitting some open shots.”

Hargett shot especially well behind the line, making four of his six 3-point attempts to score a game-high 18 points. The game’s other high scorers, Byers with 17 points and senior Kyle Snyder with 15, did a majority of their work in the paint.

Although some of WU’s usual contributors had off games, the Bods continued to show that any combination of players can step up on a given night and carry the team.

“They did a good job of pressuring us inside,” said Chipman. “Darnell [Kimble] and Brady [Sisk] struggled with that, but Grant and Paul had big nights offensively and Kyle had his usual 15-point, 10-rebound numbers.”

After a barrage of 3-pointers to start the second half, the inside game finally opened up for the Bods, and the post players responded by scoring the team’s next eight points and building the lead up to 12.

“We played good team basketball,” said Chipman. “There was a lot of hard work with defense and rebounding and sharing the ball. We had a lot of nice runs in the second half.”

The Hornets were unable to cut into that lead for the rest of the game, and the Bods went up by as many as 19 in the final minute after an impressive drive and reverse layup from fan favorite Garrett Love.

Love’s two points drew the loudest cheers of the night from a packed student section who showed up to watch the latest battle between the in-state rivals.

“It’s always a big game and a huge rivalry,” said Byers. “That’s the biggest crowd of the year, and it’s always good to come away with the win.”

Although most students consider the WU-ESU game the biggest of the year, Wednesday’s game against Fort Hays will be an even more significant in-state battle. The two teams are tied for fifth in the MIAA but are each just one game behind second place in the conference.

With senior night festivities taking place before the game for starters like Snyder, Hargett, Meile and Sisk, as well as huge postseason implications, there is just as much incentive for fans to show up Wednesday as there was Saturday. The Bods are riding the momentum of a five-game win streak and hope to send out four of their top players on a winning note in their final home game.

“With the way [Snyder] is playing right now, he’s hard to stop,” said Byers. “We want to go out there and get a win for him and the rest of our guys who are playing for the last time here.”