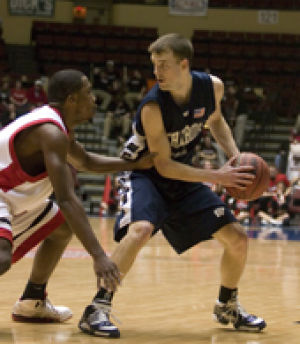 After playing together through years of ups and downs, Washburn’s seniors ended their careers somewhere in the middle.

Kyle Snyder, Andrew Meile, Brady Sisk and Grant Hargett have been a part of some of the best and worst Ichabod basketball teams of the past few seasons. When Snyder was recruited five years ago and Meile and Sisk joined him a year later, they were signing with a program that had established itself as a consistent MIAA championship contender.

By the time the trio started their third year playing together, when Hargett made his Ichabod debut, WU was suddenly struggling just to make the conference tournament, let alone win it or make the NCAA bracket.

2008 was the year for the four-member senior class to leave their mark on the Washburn basketball program and prove their legacy as Ichabods was not a disappointment. They may not have given coach Bob Chipman a championship-caliber club, but they at least carried their teammates into contention with an MIAA semifinal berth.

“That win against Central Missouri [in the MIAA first round] was a very special win for our guys,” said Chipman. “They played with energy and togetherness and they stuck together.”

Sticking together through adversity is one thing this senior class has done better than any other team in the country. After seeing nine players leave last season’s last-place roster, these four players stuck it out and exceeded any expectations others set for the 2007-08 season.

“You can tell they’ve played together and that they really, truly like each other,” said Chipman after the 79-68 upset win Friday night against Central Missouri. “They showed that tonight. I’m really proud of them.”

The seniors lost their final game to Northwest Missouri State the next night, but their perseverance through two seasons at the bottom of the conference standings deserves more credit than being remembered as 50-49 losers.

“The last two years were definitely disappointing,” said Meile. “Especially for a program as great as Washburn, not to even make it to the MIAA tournament. It felt really good to get back.”

The foursome may not have amassed impressive career records like past All-Americans Ewan Auguste and Travis Robbins, but those who watch the group play understand how successful the team is with what talent they have available.

“We played a heck of a team with good seniors,” said NWMSU coach Steve Tappmeyer. “We’ve seen enough of Meile and Snyder and those guys. I’m glad they’re graduating.”

To opposing coaches, Meile and Snyder must seem like the J.J. Redick and Roy Hibbert of the MIAA. Every year when the schedule came out, they looked at their game against Washburn and wondered how the two could possibly still be in college.

In Meile’s case, his four years seem more like 10 because of the ridiculous number of 3s he has hit as an Ichabod. With less surrounding talent and no nationally known players to complement him Meile was still able to put himself in the top 10 on WU’s all-time 3-pointers-made list.

“I just try to get my feet set and get a good look at it,” said Meile after scoring 23 against UCM. “I’ve got to credit my teammates. They find me at the right place at the right time. My team’s got confidence in me, so when I get an open look I take it.”

Snyder’s perceived longevity is attributed to different reasons. Unlike Meile, he actually has been around longer than four years because of near-annual shoulder surgeries.

“Right now you see all those seniors crying their eyes out,” said Chipman after the season-ending loss. “Kyle’s been through three shoulder surgeries, and you think about Drew. I’m just thinking about those guys. We really felt like we were one of the best teams around.”

Sisk, unlike past teammates Dylan Channel and Angel Santiago, stuck around for the duration of his career despite reduced playing time. While he looked capable of becoming a full-time starter as a freshman, Sisk accepted whatever role Chipman gave him and put the team first. Hargett didn’t log the minutes of Meile or Snyder but contributed similarly to Sisk, scoring when he was on the court and not complaining when he was off it.

“I can’t speak highly enough of our coaches and our players,” said Meile. “We really battled all year and it felt good to get back. We weren’t quite as successful as we would’ve liked to be, but overall I can hold my head high with my team and the direction this program is going”