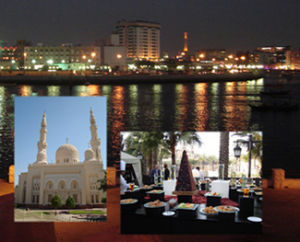 Traveling to Dubai was a rich and rewarding experience for many reasons. I attended a women’s conference there and met many interesting women from around the world. But, as it usually is with any trip, the food was an experience unto itself.

Dubai is part of the United Arab Emirates, which is located near Saudi Arabia. Middle Eastern food was much different than I thought it might be. I expected it to be spicy, somewhat similar to Indian food. This was definitely not the case. The food was seasoned, but with more sweet spices than anything else. The hummus, which is a spread made out of chickpeas, was actually good. I had previously had a poor experience with hummus, but all was forgiven. It had a nice garlic bite to it, which was good for eating but not for meeting people. Also on the salad menu was a dish called tabouli, which is a dish that can be used for many different things depending on the desire of the consumer. It is made of parsley, olive oil, mint, tomatoes and onions. Some recipes call for cracked wheat as well. The tabouli salad was wonderful with the hummus dip on the freshly-baked pita bread. One of the best things about the whole experience was how fresh everything was.

For the main course, it was usually a selection of some kind of casserole dish or a dish with meat or fish. The meat of choice is lamb. One day, I ate lamb for every meal, including breakfast, where lamb bacon was served. Because Dubai is a port city it is easy to get fresh fish, which was cooked very well and usually served with various slightly sweet sauces.

Dessert was amazing. The baklava, which is traditionally a Greek dish, was done really well there. What I ate most of was the fresh fruit that was abundant. In addition to the fruit, the juice was outstanding. It is weird to comment on the quality of the juice, but it was that good and it was everywhere.

While we didn’t get a chance to venture out of the conference hotel much, we did get a chance to wander around and experience the diversity of Dubai. On the first day we had samosas in a mostly Indian part of the city. A samosa is a small bit of fried bread dough filled with some kind of savory filling. The ones we had contained potatoes and peas. They came with a sweet dipping sauce, which I wasn’t a fan of, but it was interesting to try. On our last night, we stopped at a Lebanese restaurant and had some of the most phenomenal food of the trip. There were fresh veggies at the table, lots of pita bread and hummus as well as superbly-cooked meat.

Overall, the trip was an interesting one, and one that I truly enjoyed. I learned a lot and enjoyed some new foods along the way.