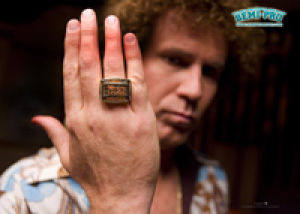 Fights, beer, minor league athletes and lots of sex. Sound like a Bob Huggins party gone horribly wrong? No. Sound like a Topeka Roadrunners game gone horribly… right? No again. It’s the synopsis for the movie “Semi Pro,” which is set in the 1970s and is about the American Basketball Association (ABA), though not actually as funny as the ABA was.

I know what you’re thinking. Wow, Will Ferrell did a sports comedy? That must have taken a brassy set of stones. See “Blades of Glory” or “Talladega Nights” for a better understanding of the sarcasm hinted in the previous sentence. As a side note, I do not accept “Kicking and Screaming” as a sports comedy for two reasons: 1) It’s about soccer, and therefore has nothing to do with REAL sports, and 2) It’s not funny.

However, as an enthusiast for basketball and the ’70s in general I thought Ferrell did a great job with this film, no matter how stupid certain parts of the movie seemed to be. I appreciate the fact that it tied in the merger between the NBA and the ABA and used actual ABA teams. The one main disappointment I had with the movie was that there was no mention of Dr. J, the most famous of ABA alumni.

In order to spark some light in the already-failing Tropics franchise Moon trades a washing machine to bring Ed Monix, played by Woody Harrelson, to Flint. Monix, who received an NBA championship ring while sitting on the bench with the Boston Celtics, initially has problems fitting in with the team. Leading scorer Clarence “Coffee” Black, played by André Benjamin, thinks Monix is a phony and didn’t deserve to have the ring. In the end, however, it is Monix’s professional experience that helps Black achieve his own goal of playing in the NBA and the team’s goal of getting to fourth place.

Members of other Ferrell movies once again have prominent roles, including Andrew Daly, Will Arnett, Andy Richter, Rob Corddry of “The Daily Show” and David Koechner. For what it’s worth, the movie is hilarious and a good way to relieve some stress. Sometimes a little stupidity can be a good thing. However, this wasn’t Ferrell’s best film and shouldn’t be treated like it. It just doesn’t have the quotability of “Anchorman.”