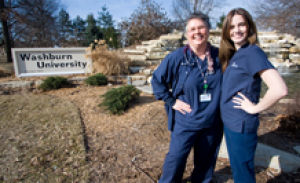 It’s been a journey based seemingly on fate for Michelle Truitt and her daughter, Lynnette Soldani. When the two began applying to nursing schools almost two years ago they had no idea that they would end up together in the exact same program at Washburn University.

Truitt surfaced from her first encounter with college with a bachelor’s of science in medical records from Wichita State University. She became interested in patient care and eventually obtained her certified nursing assistant degree, certified medical assistant degree and finally her licensed practical nurse degree from Atchison North East Kansas Technical College. It was during that time, while working in the post surgical unit at Stormont-Vail Hospital, that Truitt began pursuing the idea of nursing school.

“I could recall that my own mother went back and got her nursing degree at the age of 50, and being that I was then in much of the same situation, with the same desire, I immediately applied to the nursing programs at Baker University and, of course, Washburn University,” said Truitt.

Washburn’s nursing program was also at the top of Soldani’s list. After taking some time off from school the now-25-year-old knew she wanted to go back to college but wasn’t quite sure what for. It was after talking to a friend in the nursing profession that she made up her mind.

“I’m a people person by nature and I enjoy helping others, so it wasn’t a big stretch to decide upon nursing as a profession,” said Soldani. “My goal was to be done in four years and once I made up my mind, I sort of just hit the ground running.”

But she didn’t at all expect to go through the entire experience with her own mother. Because the two had gone through a rocky patch during Soldani’s adolescent years there was some concern about how things would work out in the classroom. The now-married Soldani still recalls the day her mother called to inform her of the predicament.

“I just remember her asking me if I would be upset if she also went to Washburn’s School of Nursing and then I remember there being a moment of silence, because initially I didn’t know what to think of the situation,” said Soldani. “But in hindsight, it’s truly been amazing.”

The mother and daughter have been together in every one of their core classes, serving as an opportunity to learn together and, just as equally, bond together. It’s something that Truitt has thoroughly enjoyed, especially the chances she gets to spread her motherly love.

“I print off worksheets for the both of us and bring my laptop sometimes so that we can look at the PowerPoint together,” said Truitt. “I even pack a lunch for her, and even though the other students will sometimes poke fun they are extremely supportive and understanding of the situation.”

Through being in a classroom environment with her mother, Soldani has realized that she and Truitt share much of the same mentality. She has also grown to appreciate her mother’s upbeat, warm personality.

“I’m not a morning person, and I can always depend on my mom to lift my spirits and get me motivated when we see each other in class,” said Soldani. “Because we are a lot alike I can always count on her to take detailed, adequate notes when I am sick and vice versa.”

Describing Truitt as someone who has always seen herself as “Mom” and put that role before any of her own desires, Soldani is overflowing with pride at the fact that her mother is finally getting the opportunity to experience a fresh pattern of life.

“I don’t think she’s ever just thought of herself and this has been her opportunity to be ‘Michelle’ again and perhaps come to find a new side of her,” said Soldani.

A young mother during her first journey through college, Truitt never got the chance to take part in the true campus life experience, so she made sure to make the most of her time while at Washburn. Upon seeing an ad in the Washburn Review about applying for a senate seat, Truitt took action and joined the Washburn Student Government Association. This semester she also studied abroad for seven weeks in Finland to take part in a Global Health Module that presented the opportunity for applied, hands-on work.

“For once in my life I had no obligations holding me back and I had never been outside of the continental U.S.,” said Truitt. “It was a phenomenal experience. People here and there are different, but so alike at the same time.”

Through getting involved and trying new things, Truitt has proved to herself that she really can do it. She loved working with other students and being seen as a student as well.

“I love that the generation gap doesn’t exist or matter to them,” said Truitt. “I don’t like to subdivide; instead, ‘What do we have in common?'”

Love, admiration and respect are evident in the mother-daughter relationship shared by Truitt and Soldani. The opportunity to share an entire journey such as this together is something Truitt said she will be sad to see end as May comes closer, and with it graduation for the two women.

Truitt, who currently still works at Stormont-Vail, hopes to continue her education after obtaining her nursing degree. She also desires a job in the Intensive Care Unit of the hospital. Soldani, currently an E.R. patient care tech who described herself as an “adrenaline junkie,” enjoys working in chaos and is excited to begin her job as an E.R. nurse at Stormont-Vail after graduation.

But even though their time together in class is ending, their time together as mother and daughter is not. In fact, it is through this experience that Truitt and Soldani have grown closer together, and it is her mother’s life example that Soldani hopes to instill in her own children someday.

“Not many people get to sit in class and walk across stage with their very own mom,” said Soldani. “She’s amazing and she has proven that nursing school can be done and done well at any age.”