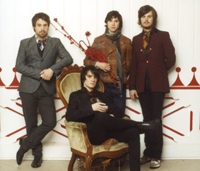 Panic! at the Disco’s rise to fame through Fall Out Boy bassist Pete Wentz, enabled all those kids who listened to Fall Out Boy obsessively to use that annoying “I listened to them before they were cool” line. This also caused Panic! to hold off the release of a new album for three years. Yes, “A Fever You Can’t Sweat Out” came out in 2005, the year I graduated high school. As almost a senior in college, I have been waiting for this album for a long time because yes, I listened to Panic! before they were cool.

It was worth the wait.

Apparently, aside from waiting for other people to catch up and listen to “A Fever,” the band also completed an entire musical concept, which they promptly scrapped. The album that they actually released on Tuesday, “Pretty. Odd.,” is a wonderful homage to their musical inspiration, most recognizably, the Beatles. Panic at the Disco – they dropped the exclamation point, I am not sure why, but I am a little disappointed – finished the album at the Abbey Road studios in London and the album has the brass to prove it.

Some of the songs are fairly blatant in their similarities. Panic’s “Pas de Cheval” has the same galloping drum/guitar base as the Beatle’s “Get Back” off of the “Let It Be” album. There are many other inspirations in there, but the heyday of 60’s rock is the most prominent.

There are only a few missteps here and there, including the entire song of “Folkin’ Around,” complete with harmonicas, fiddle and acoustic guitar. As one who has been only transplanted into the world of country music, I asked a country music connoisseur friend of mine about the song. He said that it sounded like they were trying too hard to sing a country song, something I didn’t know one had to try “hard” to do. I find this song’s style ironic, considering most of the kids that buy Panic at the Disco albums would rather throw their guyliner away and make their angled bangs straight than listen to a country song. The attempt is admirable but confusing for the most part.

They lost the witty titles, which is supposed to be a sign of their maturity as artists, I suppose. Also, frontman Brendon Urie does not do all of the singing, the rest of the band chimes in sometimes. For the most part, Urie’s voice is a little stronger but hasn’t changed much, which might really be the only part that makes a non-Panic fan realize it was Panic at the Disco. Also, there is some “Fever” Panic-esque, tinny parlor music on “She Had the World” that might tip one off.

Overall, the album is a nice, smooth answer to a possible sophomore slump. Some of the songs will be hard to translate into arenas in front of hundreds of thousands of people, most of whom will be screaming. This album would probably be something that the tweens and their parents can enjoy. As for the generally musically pretentious high school and college students in between, it is a good album to add to one’s collection, particularly if you appreciate the Beatles. If you liked the Panic! at the Disco from before, be forewarned, this is Panic at the Disco and they have a whole new song and dance.