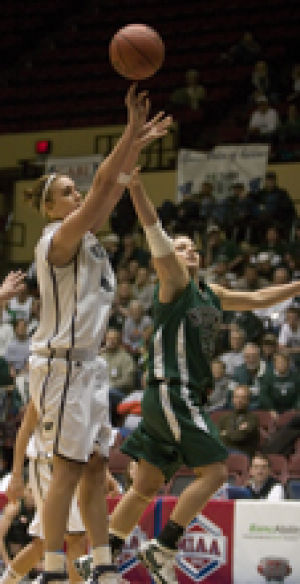 Preseason expectations are always high for the Lady Blues, but after losing five seniors from the 2006-07 Sweet Sixteen team, it was reasonable to expect a drop-off from previous teams that had players like Jennifer Harris, Brooke Ubelaker and Cindy Keeley.

Fortunately for the Blues, the expectations of others don’t mean anything. Despite the departures of key players, WU set championship goals for this season that ended up being more realistic than most imagined.

The team’s two seniors, Corkey Stiger and Amanda Holmes, carried Washburn to a regular season conference championship as well as an appearance in the Elite Eight.

“This will always go down in my book as a fighting team that would commit to playing hard,” said coach Ron McHenry. “For what was expected out of this group with 10 new players and what they were able to do, it’s been special to me.”

It’s a mystery why McHenry didn’t draw MIAA coach of the year consideration after keeping the Blues among the nation’s best despite the departures of several top players. However, when a team replaces a senior class with a duo like Stiger and Holmes the Blues’ competition has anything but sympathy for the perennial conference powerhouse.

“[The seniors] were great,” said sophomore Renata Germano. “Not many believed we would go this far since we only had two seniors. There wasn’t a lot of leadership left from last year’s team, but the two senior leaders that we had were really great.”

The leadership provided by the two seniors was more than enough to go around, and their play on the court was a big reason for the Blues’ run to a South Central Regional championship. Stiger scored 99 points in four tournament games, including 31 in each of the last two, to become the third player in WU history to score 1,000 in a two-year career. Holmes scored 61 in the NCAA tournament, including 27 in the second round against Central Oklahoma.

Stiger’s career-high scoring performance and Holmes’ double-double weren’t enough to advance past South Dakota in the Elite Eight, but in the eyes of teammates and coaches that doesn’t take anything away from what the pair accomplished in their time at WU.

“I want to thank this team for the way they played and our two seniors for how they committed to Washburn basketball and led us to the Elite Eight,” said McHenry. “I’ll always be proud of this basketball team for where they got and how they did it, because it wasn’t an easy run.”

Stiger, a junior college transfer, joined WU with the same jersey number as her predecessor Harris. Had she been a Lady Blue for all four years of her college career, her numbers could have resembled Harris’ as well.

Holmes transferred after playing one season at TCU and enjoyed immediate success at WU. After starting every game for the past two seasons and seeing playing time in every one of her 99 career games, Holmes leaves WU as one of the greatest shot blockers in Lady Blue history.

“It was an up-and-down year and we stumbled a few times along the way,” said Holmes. “But I love this team and every girl on it. I’m mad that we’re done because I don’t know what to do with the rest of my time, to be honest, but I’m so glad I was in it with these people. They’ve made such a difference in my life.”

Opponents will be glad Holmes is no longer around to make a difference in the flight path of their shots. With Holmes’ shot-blocking abilities and Stiger’s team-high scoring gone next year, the Lady Blues will again have to count on a new cast of leaders to keep WU at the top of the MIAA.

“I’m hoping we can improve next year,” said Germano. “Hopefully we can be like the older teams and with some more experience do what we did this year and maybe be even better.”

Despite all the scoring Stiger did, especially down the stretch in the NCAA tournament, teammates still wish they had fed her the ball even more often in her final game.

“I think the one thing that would have helped us get an edge in our last game would be to get [Stiger] the ball more in the second overtime,” said Germano. “She was playing so well, we should have adjusted and made sure she could keep shooting.”

It’s hard to say how high expectations will be for the Lady Blues next season after losing the two players on whom WU was most dependent. However, the 10 newcomers who return to next year’s team have learned from Holmes and Stiger that expectations are meaningless if you work hard enough to overcome them.

“I’m happy with how we played in the last game,” said Germano. “But it’s bittersweet that we didn’t make it to the championship. I’m really confident that with enough practice, we can be just as good, or even better, next year.”