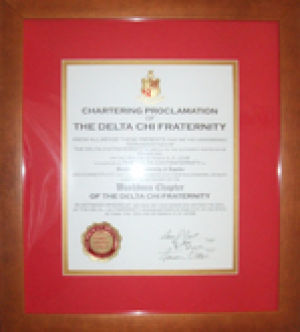 After two years of preparation the Delta Chi fraternity has received a charter, making them a permanent addition to Washburn University. Since it has been awarded a charter by the fraternity’s international association, Delta Chi is now a full-fledged member of the Greek community. A new fraternity has not been given a charter at Washburn for 60 years.

Colonized in 2005, Delta Chi has been striving during the last two years to show it would be a valuable asset to Washburn, and has been working for the last two months on organizing its Chartering Banquet, hosted Saturday, March 15. They also have been and will continue to plan social events throughout the rest of the semester and are working hard to not lose their momentum.

“It’s been a really big team effort and I’m really excited to be a part of it,” said Clay Freeman, Delta Chi vice president.

Freeman said Delta Chi strives to be an organization full of leaders, with members taking up posts in multiple organizations across campus, from the Washburn Student Government Association to the Campus Activities Board.

“We recruit people we would like to see take on other leadership positions,” said Freeman.

Meetings will be held during the rest of the semester to figure out the specific goals for the fraternity and for what exactly they wish to be known. Mike Ditch Jr., Delta Chi treasurer, said the fraternity administration is taking input from other members of the chapter while still maintaining camaraderie within the house.

“We’re just trying to focus on the brotherhood, education and quality bonds between members,” said Ditch.

While an official chapter house is a staple of most Greek organizations, Ditch said that is not something that would be happening anytime soon, as a purchase of such magnitude takes time to develop and plan. Several members are already renting a house located across from campus at the corner of 17th Street and Mulvane Avenue.

According to Delta Chi’s official website, www.deltachi.org, the organization was originally a law fraternity formed in 1890 by 11 students at Cornell University. The fraternity opened its doors to the general student population in 1922 and also became the first fraternity to officially abolish hazing activities involved in with initiating new recruits. There are 126 Delta Chi chapters and colonies operating throughout the United States and Canada.