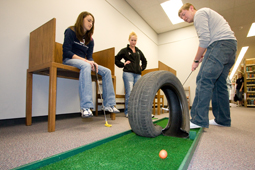 Freeze gopher! Zach Lee, student at Kansas State University, burns some rubber at CaddyStacks Saturday in Mabee Library. Accompanying him on the links were Robin Grenier (left) and Samantha Grief.

Golf balls were rolling in Mabee Library as the first annual CaddyStacks fundraiser got into full swing Friday and Saturday. Organizers said around $5,000 was raised by setting up a full 18-hole putt-putt course in the library.

It’s not all about money, though. CaddyStacks is just the beginning of an initiative to draw new student and community interest in the library.

“It’s been a great way to get students in the library,” said Alan Bearman, interim dean of university libraries. “It’s a step in the right direction of helping people think of the library as a place to come and study and utilize.”

Some of the financial contributors to the event were Ace Computers, Jack & Cindy Barry, Adam & Amy Crouch, Shelley & Alan Bearman and the Washburn Endowment Association. This group sponsored some of the holes set throughout the library.

“We’re getting people into the library that have never been here before, and they’re having fun,” said Jenny Mills, student coordinator of CaddyStacks and president of the Student Chapter of the Friends of Mabee Library.

Although students have seen needed updates to the library, many thought the putt-putt fundraiser could really help get things up to par.

“They’re really trying to get things going to make the library more available to students,” said Angel Romero, sophomore. “I think if they keep things like this going with the excitement and momentum and keep students talking about it, the library is going to go places.”

The library hopes to keep the hype going. Plans are already underway to get started on the next CaddyStacks fundraiser.