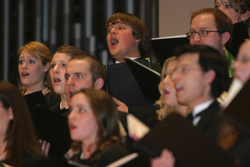 Choral chords The Early Spring Choral Concert in White Concert Hall kicked off with a bang as the Washburn Women's Chorus, Washburn Singers and Washburn Choir sang majestically Friday evening. Kevin Kellim. pictured in the far left photo, and Catherine Hunt directed the vocal ensembles through a variety of tunes

Maybe it was the beautiful spring weather that served as inspiration. The vocalists perfectly nailed every high and low note Friday evening at the Early Spring Choral Concert in White Concert Hall.

Under the direction of Catherine Hunt, director of music education, the Washburn Women’s Chorus performed two madrigals and three ballads, including one called “Will He Remember?” which featured short solos by soprano Karen Marsh and alto Jennifer Berroth.

Hunt said she was very happy with the talent in this year’s Women’s Chorus. Currently in its fourth year, the ensemble is open to any woman who wants to join.

“Half our participants aren’t music majors,” said Hunt. “We really strive to be an inclusive organization.”

After the Women’s Chorus, Kevin Kellim led the elite Washburn Singers through an assortment of different musical styles. The group sang everything from “Ave Maria” to the melody “It’s a Most Unusual Day” from the 1948 film “A Date with Judy.”

Also under the direction of Kellim, the Washburn Choir was the third and final choir to perform for the evening. The group performed six songs from various genres, including “Dis Ol’ Hammer” and a beautiful version of “Shenandoah.” The choir’s concert finale was Moses Hogan’s arrangement of “Battle of Jericho.”

Rick Huffman, Anna Reb and Elliot Lauxman each performed memorable solos that were interspersed throughout the course of the concert. All three students are music education majors at Washburn.

Before the Washburn Choir’s final performance of the evening, Kellim reminded audience members about upcoming choral events for the semester. The Washburn Singers and Women’s Chorus will hold their annual Cabaret Concert 7:30 p.m. April 27 in the Kansas Room in the Student Union. And Beethoven’s “Choral Fantasy,” a piece that incorporates instrumental and choral music, will feature the combined talents of the Washburn Choir and the Washburn Orchestra.