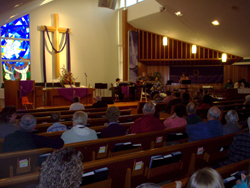 Concert of concern An assembly of church members and musicians gathered at Silver Lake United Methodist Church for a concert benefiting 1-year-old Ellie Wonnell. Wonnell was born with esophageal atrisia, an AV canal defect and Down syndrome.

It truly appeared that each and every person in the room was there with the pure intention of supporting Ellie and her family both monetarily as well as emotionally.

“The parents don’t have much money, and they’ve been good church people,” said Betty Mitchell, a longtime member of SLUMC.

Another member of SLUMC, Connie Kelsey, shared that opinion.

“We so much take healthy children for granted, and we are very grateful that our children and grandchild are healthy,” said Kelsey. “When something like this happens in a small community people want to do whatever they can to help.”

A free-will offering was collected during the concert. All funds raised will aid Ellie’s family.

In the past 14 months David and Natalie Wonnell have learned the true meaning of the phrase “miracles come in small packages.” Their daughter Ellie was born Dec. 20, 2006, with esophageal atrisia, a condition that caused her stomach to be completely disconnected from her esophagus; an AV canal defect, or holes in her heart; and Down syndrome. Ellie has undergone seven surgeries in the course of her life up to this point, including open-heart surgery and a gastric pull-up to connect her stomach and esophagus. Today Ellie is doing well, considering all she has been through, including being fed through a feeding tube, but she is learning to eat orally and wears glasses to help her eyesight. However, medical insurance only covers so much, and her parents are experiencing financial difficulties.

According to Dixie Little, member of Harvest Grove Grange and SLUMC as well as head coordinator for the concert, the idea for the event came from a church-wide week of prayer for Ellie. Little was compelled to help the Wonnell family in some tangible way and thought hosting a benefit concert would be the best route. Little mentioned the idea at a meeting of the Harvest Grove Grange, of which many members are SLUMC attendees. Realizing they could not pull it off on their own, the Grange came together with SLUMC to host the concert.

The musicians hoped to inspire people to donate to Ellie’s cause through the giving of their musical talent. Steve Brennan considers it “a gift from God to share music in church.” When asked, Brennan said he plays at church functions as often as possible. Brennan was inspired by his nephew to use the gift of music to help others. As a young adult Brennan’s nephew broke his neck and has been confined to a wheelchair since, but has beaten the odds by excelling in a career.

“I’ll do my bit,” said Brennan. “If people feel compelled to contribute then it’s been a success.”

Brad Hase wants to inspire “a mood of giving, compassion and willingness to contribute” for his part in Ellie’s concert. He brings the perspective of a parent to the Wonnells’ situation.

“I’ve never had to experience health issues that serious with my kids,” said Hase, “but being a parent I know what these folks are going through.”

Rodney Roberson wants his playing to inspire concert-goers to donate to the Wonnells’ cause.

“I hope that others will learn that we can all give and help each other in times of need,” said Roberson.

As for Natalie Wonnell, she is in awe of the support given to her family by the SLUMC community.

“It’s incredible,” said Wonnell. “We have a lot of people who have done very nice things for us, and it’s overwhelming.”

It is not too late to make contributions on Ellie’s behalf, according to Janet Martinek, assistant concert coordinator. They can be sent to The Ellison Wonnell Fund, c/o Silver Lake United Methodist Church, 204 Madore, Silver Lake, KS 66539.