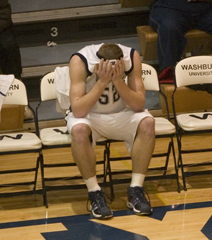 The Ichabods entered the final week of the season with the chance to finish as high as third or as low as sixth in the MIAA standings.

After the 69-66 loss to Fort Hays State and the 64-59 loss at Central Missouri, the Bods will have to settle with the No. 6 seed and a rematch with No. 3 Central Missouri.

The Bods (17-10 overall, 9-9 MIAA) were ranked No. 10 in the South Central region, just two spots away from the NCAA tournament, but the momentum gained from their five-game win streak suddenly disappeared after the home loss to FHSU (18-9, 10-8) on last Wednesday’s Senior Night.

“It’s hard to lose close games like that late in the season,” said senior Kyle Snyder. “But we haven’t played any different than we were during our win streak. We just have to finish out the close games.”

Snyder, playing for the last time in Lee Arena, had 14 points and a game-high 11 rebounds. Fellow seniors Brady Sisk and Andrew Meile also had big games in their home finales, scoring 19 and 13, respectively.

Washburn erased a 10-point deficit by shooting 50 percent in the second half and went ahead 60-58 after a dunk by Snyder with 3:54 remaining. FHSU answered with a 3 to regain the lead. Meile made a 3 with 1:08 left to bring the Bods within two, but with three seconds left he missed a long distance attempt that would have sent the game to overtime.

“It’s tough losing like that in your last home game,” said senior Grant Hargett. “But we still know we can win games if we play well in the postseason.”

The loss likely eliminated the chance of the Bods drawing an at-large bid in the NCAA tournament, meaning the only way to make it into the field of 64 is to win the conference tournament. However, winning at UCM still would have given WU a chance to improve its seeding in the MIAA and build some late-season momentum.

“Playing away makes it so much harder in this conference,” said Hargett. “They get a little more comfortable and all the pressure’s on us. You don’t want to be in a situation where you have to make tough plays at the end just to win.”

Like so many road games before, the Bods came up just short in a last minute loss. The game could have gone either way, with the score tied 58-58 and 1:40 on the clock, but the Mules (18-9, 11-7) hit their free throws down the stretch to avenge their loss to the Bods earlier in the season.

“They were unbelievable from the line,” said Snyder. “We just couldn’t get a shot to go in at the end. We hung in there and played hard, but I don’t think they ever missed a free throw at the end of the game.”

UCM made 20 of its 24 free throws for the game, while WU only made six on 10 attempts. Snyder was in a battle down low all game with UCM’s Kevin Wollbrinck and dominated him on the boards, snagging 16 despite being outscored 14-8.

“We were banging in there pretty good,” said Snyder. “He’s a great player, real big and physical.”

Snyder kept the Bods close with his game-high rebounding total, but the team’s inability to hit the close shots cost them in the end.

“We missed some shots right around the basket,” said Snyder. “We did a good job of getting the ball in there, but it just wasn’t going in for us. It just comes down to making easy shots and the free throws.”

The Bods got the ball with 10 seconds left and called a timeout to draw up a play and sub in guard Mario Scott. Once again, WU was down by just three and was one big shot away from sending the game to overtime.

Just like the game before, however, the play was busted and the Bods were forced to take a difficult shot.

“Mario [Scott] had to make that decision to take the shot at the last second,” said Hargett. “It wasn’t the shot coach drew up for us but if it went in that would have tied it up, and people would be talking about how great of a shot it was.”

The week’s two losses are a low in WU’s constant up and down season, but the players say their emotions have not dipped too far from the high they experienced in their five-game winning streak.

“Our confidence is fine,” said Hargett. “We know where we’re at right now. We lost to two great teams, but what matters is what goes on in Kansas City. We put ourselves in position to make the conference tournament, now we need to go out there and win it.”

The win puts the Mules in third place in the MIAA, which means the two teams will face off again on a neutral court in the tournament’s first round. The teams each won the matchup on its own home court, and the winner of round three will be one step closer to the NCAAs.

“We’ve got to take a couple days off, then come back and get focused and win the MIAA tournament,” said Snyder.

For the first time in three years, the Bods earned the chance to travel to Municipal Auditorium for the conference tournament, and are now three wins away from a spot in the NCAA tournament.